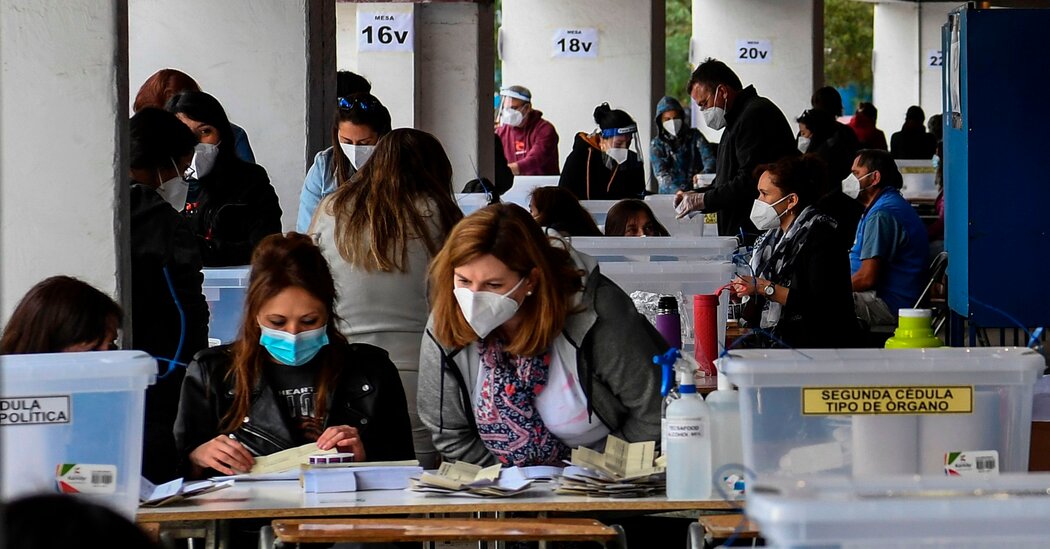 SANTIAGO, Chile — The protests started over a small hike in metro fares, then exploded into a broad reckoning over inequality that shook Chile for weeks. Hundreds of thousands of demonstrators poured into the streets, calling for sweeping change in their society, with higher wages and pensions, better health care and education.

The movement soon seized on a vehicle for their demands: Chile’s Constitution.

The existing charter, drafted without popular input during the military dictatorship of Gen. Augusto Pinochet and approved in a fraudulent plebiscite in 1980, was widely blamed for blocking change — and seen as a lingering link to a grim chapter in Chile’s history.

On Sunday, just over a year after the massive demonstrations swept the nation, Chileans voted to scrap the dictatorship-era document and write a new one — a process that could transform the politics of a country that has long been regarded as one of the most stable and prosperous in Latin America.

The referendum was headed for a landslide victory; with about half the votes counted, more than 77 percent were cast in favor of a new Constitution, and it was leading in almost every part of the country.

“This plebiscite is not the end; it is the beginning of a path we should all undertake together,” President Sebastián Piñera said in an address from the presidential palace.

“Until now, the Constitution has divided us,” he added. “As of today, we should all cooperate to make the new Constitution become one home for all of us.”

Until the protests last year, the idea of a new Constitution “wasn’t on anyone’s agenda,” said Lucía Dammert, a political scientist and board member of the research center Espacio Público. “The fact we are now discussing a new Constitution is a victory of the social movement.”

The vote, originally scheduled for April, was postponed as Chile went on lockdown during the pandemic. Now, with most of the capital, Santiago, and other areas gradually opening up, voter turnout was high.

Thousands of people flocked to the Plaza Italia in Santiago to celebrate on Sunday night, chanting, dancing, waving flags and setting off fireworks. Demonstrators unfurled banners addressed to Pinochet, with messages like “Goodbye, General,” and “Erasing your legacy will be our legacy.”

“Today, citizenship and democracy have prevailed, and peace has prevailed over violence,” Mr. Piñera said. “This is a victory for all Chileans.”

On Sunday morning, Chileans turned out in droves to participate. Throughout the country, voters in masks ringed block after block in calm, orderly lines.

After transitioning to democracy in 1990, Chile’s market-friendly business environment, framed in part by the Constitution, attracted foreign investment. The country grew consistently and saw poverty go down. But this came at the cost of an acute concentration of wealth and growing inequality. Last year, the United Nations Economic Commission for Latin America estimated that nearly a quarter of total income goes to 1 percent of Chile’s population.

To cover the high cost of living, Chileans are greatly indebted. The Central Bank found last year that on average nearly three-fourths of household income was used to pay debt. The public health care and education systems are in shambles, and meager pensions force most people of retirement age to continue working.

Amalia Gómez, 66, barely gets by on a $125 monthly pension and picks up seamstress jobs to compensate. She and many others like her see a new Constitution as a path to better lives and a more equitable country for future generations.

“Why not, if we are a country rich in minerals, fish, agriculture?” she said. “Why can’t we use those resources to our benefit, for our education and health?”

Sunday’s ballot asks voters whether they want a new Constitution, and who should draft it: a body of only newly elected representatives or a convention in which half of the delegates would be members of Congress.

Voters overwhelmingly opted for a newly elected constitutional convention, without automatic inclusion of Congress members. Elections will be held in April to choose the delegates, among whom there must be gender parity. Political factions are still negotiating whether to reserve seats for Indigenous delegates.

Chileans are now scheduled to vote in 2022 to approve or reject the Constitution the convention drafts.

As the nation geared up for voting, tensions were high.

After last year’s immense protests — known as the “estallido,” or explosion — rocked the country, the pandemic sent demonstrators home for much of 2020. Timid protests returned last month, leading to clashes between demonstrators and the police.

In one protest on Oct. 2, a police officer pushed a teenager off a bridge and into the bed of the Mapocho River in Santiago. The teenager survived with fractures, and the officer was charged with attempted murder and expelled from the force.

Last Sunday, tens of thousands flocked to the protests’ epicenter, Plaza Italia, to commemorate the anniversary of the uprising. The demonstration was largely peaceful, but late in the afternoon small groups set fire to two churches, including one used by the police for religious services.

By early last November, the clashes had left five people dead and nearly 1,800 wounded. Mr. Piñera was facing competing calls to deploy the armed forces to restore order — or to resign. Instead, he announced he was willing to open the process for a new Constitution — an idea that sharply divided his own party.

The 1980 Constitution has undergone several changes since it was drafted behind closed doors by a Pinochet-appointed commission. The most significant shift, in 2005, eliminated major authoritarian provisions.

It “means putting an end to the chapter of dictatorship,” said Hernán Becker, 58, a salesman who participated in a demonstration last Sunday. “Its origin is totally illegitimate: under military rule, with no freedom of expression, no freedom of assembly.”

Rewriting the charter will also allow greater flexibility for Chile to make the economic and policy changes demanded by protesters.

Under the current charter, new laws may be subjected to scrutiny by a constitutional tribunal, which has the final say on whether they pass muster. And laws that touch on education policy, political parties, the military, the electoral system, mining and reforming the Constitution, among other topics, require a supermajority for approval.

“Chile’s Constitution is neoliberal in nature, and its basic role is to guarantee conditions for the free market, even in traditional social areas such as education, health and social security,” said Fernando Atria, a law professor specializing in constitutional matters. “What we need is a Constitution that guarantees social rights more than market conditions.”

While the proposal to write a new Constitution enjoys widespread support, opponents say it would be a mistake to scrap a charter that has been instrumental in Chile’s economic success.

“It guarantees freedom, protects individuals from the excesses of the state, ensures the protection of property and guarantees social rights,” said Gerardo Jofré, a businessman and one of the directors of the Independents for Rejection campaign. “Those who are rebelling in Chile don’t want to change the Constitution, they want to change the model, and that is a monumental mistake.”