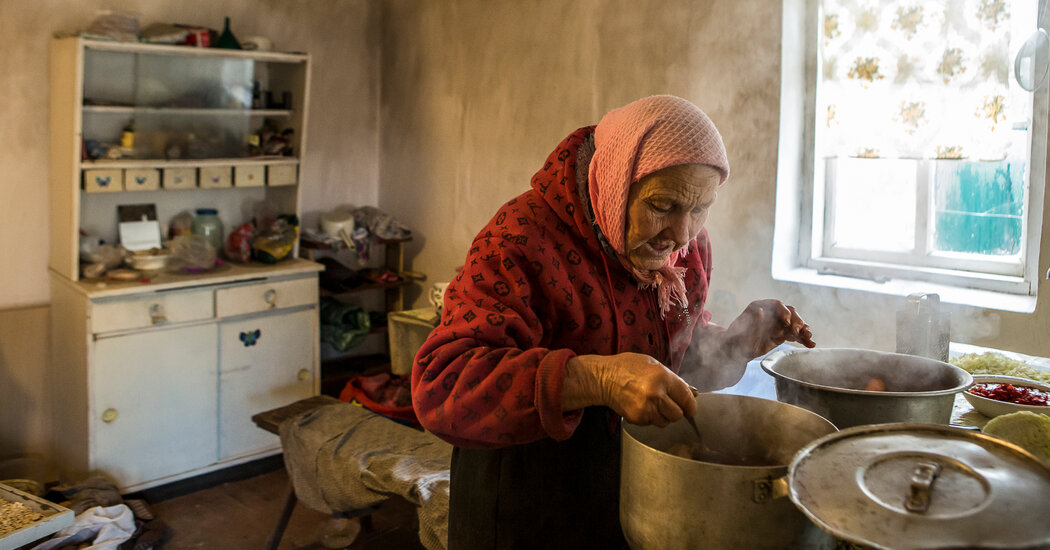 BORSHCHIV, Ukraine — The roadside cafe is called Borscht, advertised with a gigantic beetroot red sign, leaving little doubt what people around here like to eat.

The fields are planted with beets. The town is named Borshchiv, which means “belonging to borscht.” It is just one of a dozen cities and villages in Ukraine named for borscht.

Given this clear commitment to borscht, Ukrainians wonder why the soup is commonly assumed to be Russian, a national dish of their archenemy.

Now a Ukrainian chef supported by the Ministry of Culture and Parliament is trying to set the record straight with an application to the United Nations’ cultural body, UNESCO, to list borscht as an intangible part of Ukraine’s cultural heritage.

“They can think whatever they like, but borscht is a Ukrainian soup,” said Olha Habro, a grandmother and well-practiced maker of borscht in Borshchiv.

Like the food fight between the Arabs and Israelis over who owns hummus, the dispute sadly divides two neighboring cultures over traditions that might have united them. Borscht is enjoyed in both Ukraine and Russia.

This conflict, though, comes with a twist. Even some Russian culinary historians and authoritative Soviet-era reference books on food place the origin of borscht in Ukraine. But after the Soviet Union broke up, Russia seemed to stake more of its own claim to the soup.

A year ago, the Russian government posted in English on its Twitter account a recipe proclaiming that “borscht is one of Russia’s most famous and beloved dishes.”

For the chef, Ievgen Klopotenko, it was the last straw. He had already been upset, he said, when friends told him that stores and restaurants in Europe and the United States market borscht as a Russian soup.

“A lot of things were taken away from Ukraine, but they will not take our borscht,” he said, adding, “I understood we have to defend what is ours.”

He went to battle, creating a nongovernmental organization to assert Ukraine’s sovereignty over borscht. The group spent months painstakingly gathering evidence that the dish originated in Ukraine and planned cultural events celebrating it, including taking a giant caldron around the country to cook borscht at festivals.

Ukraine plans to submit the UNESCO application in March. Parliament has passed a resolution in support.

To win recognition from the United Nations cultural body, the Ukrainians do not have to show that borscht is exclusive to their country, only that it is tightly entwined with their culture in such things as wedding and funeral traditions. And they must show that the soup is consumed widely. Town names also count.

The borscht dispute highlights deeper grievances between Ukraine and Russia.

Ukrainians see the Russian government, in addition to pursuing a military intervention in their country, as trying to appropriate the entire cultural heritage of the eastern Slavic world for Moscow, on such issues as leadership in the Orthodox Church and historical claims to Crimea.

In Western countries, borscht came to be viewed as Russian in part because of the tendency for many decades to conflate Russia, which was only one of the Soviet republics, with all things Soviet.

At home, many Soviet cookbooks identified borscht as Ukrainian, including an authoritative study of ethnic cooking published in 1978, “National Cuisines of Our People,” which listed six recipes, all from regions of Ukraine.

Even the Soviet classic cookbook, “The Book of Tasty and Healthy Food,” first published in 1939 under Stalin, does not describe borscht as Russian. It has only one recipe for the soup indicating a national origin, and that is for “Ukrainian borscht.” The others are specialized versions with mushrooms or low in fat, of unspecified origin.

To be fair, Russia also has a dozen villages and towns named for borscht, each with its own recipe, and the soup is on the menu at any restaurant serving Russian cuisine. Nobody disputes that Russians today eat plenty of borscht.

But it is a relatively modern addition to the Russian menu, said Olga A. Syutkina, a Russian culinary historian and author of “The True History of Russian Cuisine.”

It spread widely in central Russia starting in the late 18th century, she said, in part because the soup was easily made in large batches and served by the tsarist military. Later, it became a staple in cafeterias in Soviet factories.

“The association with the Soviet epoch creates the illusion that borscht is an inalienable part of the Russian menu,” Ms. Syutkina said.

Adding to the confusion, Russians seeking to lay claim to borscht’s origins sometimes cite an entirely different soup that was made in medieval times in Russia from wild hogweed grass and a light beer made from fermented bread. It, too, was called borscht, and is mentioned in a 16th-century Moscow book of advice about home life, “Homemaker.”

In rural Ukraine, gardens yield all the ingredients. For the winter, Ukrainians preserve sour sorrel leaves in canning jars as a base for green borscht, a version without beets. For funeral wakes, vegetarian borscht is on the menu.

More typically, it is a meaty broth, sometimes so rich a quarter inch or so of glistening, liquid fat shimmers on the surface.

A secret of borscht is accounting for the different cooking times of the ingredients, typically beetroot, carrots, beans, potatoes and some sort of meat, usually beef, but sometimes pork or chicken. Ms. Habro uses two pots — the meat, beans and potatoes in one, the beets and carrots in the other — mixing the two just before serving.

Last month Russia seemed to back down — a rarity these days — on any claim of a direct sphere of influence over the soup. “Borscht is a national food of many countries, including Russia, Belarus, Ukraine, Poland, Romania, Moldova and Lithuania,” the Russian Embassy in Washington posted on Twitter. “Choose your favorite.”

The post did include a video of a recipe for “Russian borscht,” by a division of the Russian Information Agency, a state news outlet at times accused of influence operations. It was a version built on beef bouillon with potatoes, spiced with black pepper, which appeared tasty enough.

Anton A. Alyoshin, head chef at Clever, a culinary school in Moscow, said the more traditional Russian soups use sauerkraut rather than fresh cabbage, reflecting the tradition of preserving vegetables for the long, harsh northern winters. The result is a delightful pork and sauerkraut soup — shchi — that is more indisputably Russia’s own. It is also served with sour cream, but, sadly, is not well-known outside Russia.

“By the culinary canon, borscht is a Ukrainian tradition,” Mr. Alyoshin said, surrendering without a fight. “If we talk about shchi, a similar dish, it is more Russian.”

He clarified that borscht “is a dish with a tremendously long history” that has been made in Russia for generations, and said that he and countless other Russian cooks enjoy stewing pots of borscht.

“To be honest, borscht is a Slavic national dish: It is Russian and Ukrainian,” he said. “The roots are the same, but politics interfered.”