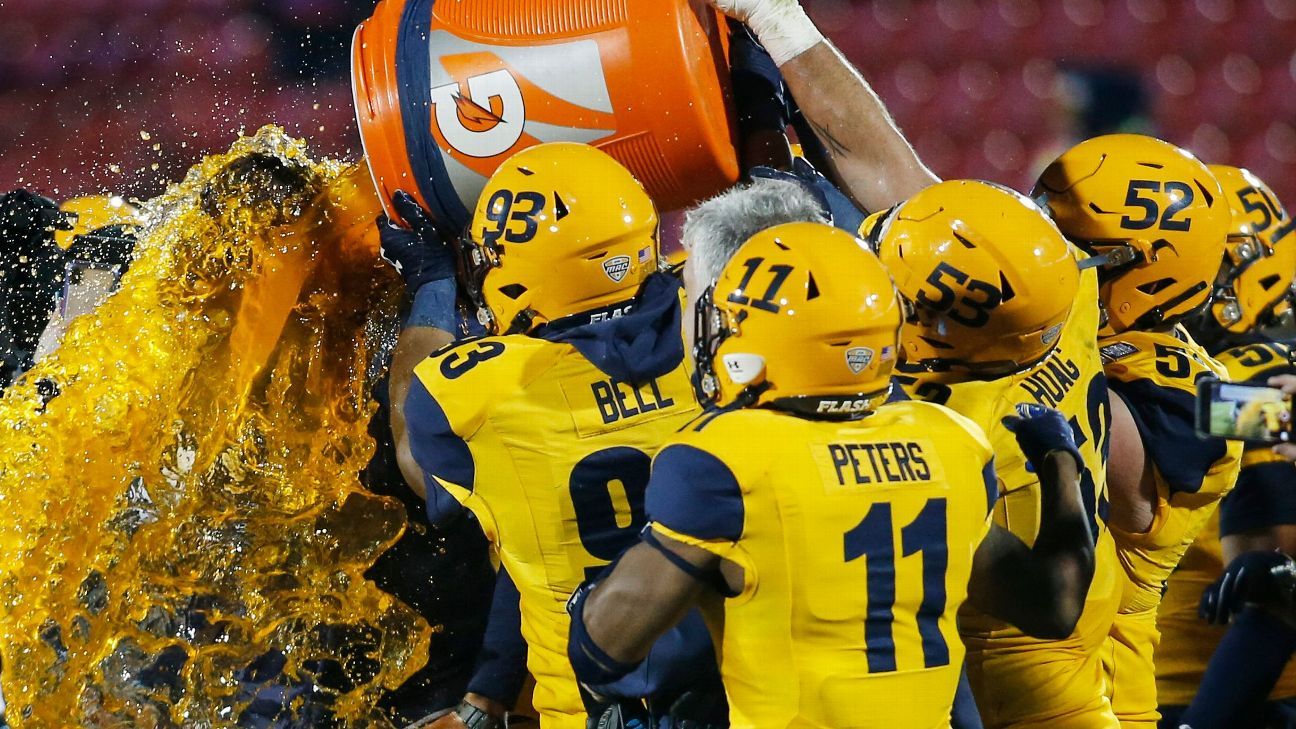 About a million years ago in February and March, I posted a pair of MAC previews — East division and West division — to kick off a 2020 series of previews that stretched a couple of months longer than expected and, in some cases, were quickly outdated.

The projections in those previews were for schedules that disintegrated months ago, and the rosters probably aren’t up to date, but the storylines I discussed in each remain relevant and are still worth a read. As the conference finally kicks off its short season on Wednesday, let’s update the projections and discuss some of the most interesting storylines for this seven-week sprint.

Will the close-game gods smile on Miami again?

The biggest difference between these numbers and the preseason coaches’ poll rankings: Miami is the preseason favorite to repeat as East champ, per the coaches, but SP+ says last year’s success was smoke and mirrors.

The Redhawks went 5-0 in one-score finishes and were outgained in four conference victories, two trends that are awfully hard to continue. It was a sudden burst of progression toward the mean for head coach Chuck Martin. He has won seven straight one-score games after losing nine straight. Miami was absurdly young last season, and continuity should make the Redhawks a better team. But the god of randomness might not be so kind in the fourth quarter this time, and because of that, the numbers like Ohio and Buffalo.

Speaking of the preseason polls …

Here’s some quick math for you: There were 12 votes in the coaches’ poll, and it’s safe to assume that the last-place pick in each division got one point and the fifth-place vote got two, up to the first-place vote getting six. It’s a simple, easy scoring system.

Akron ended up with one first-place vote and 17 total points. That means one coach voted for Akron to win the East, and the other 11 picked the Zips last. With no research whatsoever, I’m confident saying this is the first time in the history of coaches’ polls that this has happened. I have a vision of a coach literally listing teams in alphabetical order, a theory that gets at least a slight boost from the fact that the West division’s top team alphabetically, Ball State, also got a first-place vote.

(The Cardinals’ first-place vote is more legitimate, as they’re likely to be pretty good. Still, let me believe in the alphabetical vote.)

Does Ohio have a quarterback?

The fact that Frank Solich still doesn’t have a MAC title to his name is both crazy and statistically unlikely. His Ohio Bobcats have ranked in the top four in the MAC seven times since 2007 and five times in a row. They were second in 2017 and first in 2018 and 2019. But they are 0-4 in conference title games, and they didn’t even make the championship game the past two years. They always lose the one game they shouldn’t.

From top to bottom, Solich might have the healthiest program in the conference at the moment, and if he has a solid quarterback, Ohio could be a favorite again.

It appears that the starter will be one (or both) of two players: redshirt freshman Kurtis Rourke and UNLV transfer Armani Rogers. Rourke is the younger brother of Nathan Rourke, who started from 2017 to ’19 and averaged 2,500 passing yards and nearly 900 rushing yards per season. He was outstanding, and one assumes that little bro — as “little” as you can be at 6-foot-3, 211 pounds — has similar strengths and weaknesses. Adding Rogers is tantalizing, though. At UNLV, Rogers never developed as a passer (and was hurt a lot), but he flashed spectacular athleticism. Ohio’s run-heavy system could be perfect for him. If one of these players steps up, Ohio is the East favorite. If not, give me sturdy, physical Buffalo instead.

Four teams are projected within half a win of one another. Those four all got between 50 and 54 votes in the coaches’ poll. The West could be decided by a series of coin flips over a series of weeks.

I love what Chris Creighton has done, but he has a pretty big restocking job to do this season. NIU is looking for traction (and dealing with turnover) after slipping to 5-7 and 115th in SP+ last season. But it’s really hard to separate the other four teams.

Can Toledo’s coaching ringers turn the defense around?

If a team ends up running away with the West, I think Toledo is the most likely to win. The Rockets have a long-term track record — before slipping to 6-6 and 114th in SP+ last year, they were 66th or better for six straight seasons and won 39 games from 2014 to ’17 — and they are almost always at or near the top of the MAC’s recruiting rankings.

I’m primarily intrigued by the Rockets, however, because of the ringers coach Jason Candle stocked in his defensive staff. New defensive coordinator Vince Kehres moves up from Division III after a 95-6 lifetime record as Mount Union’s head coach. Defensive co-coordinator and outside linebackers coach Craig Kuligowski was a TFLs machine as defensive line coach at Missouri, Miami and Alabama before he sat out the 2019 season. How much of an immediate difference can these coaches make for a defense that fell from 54th to 121st in defensive SP+ in just two years?

There are no outright bangers in the first week of MACtion — no Ohio-Buffalo, no Ohio-Miami, no battles among the West’s top four. There are a couple of near-bangers, though: Ohio heads to Mount Pleasant to take on Central Michigan at 7 p.m. ET Wednesday on ESPN, and Miami gets to test its close-game credentials against Ball State at home, also at 7 p.m. ET Wednesday (CBSSN). It should be a pretty entertaining and informative evening in the Midwest.

Movie admin - December 1, 2020 0
Although Tyrese Gibson debuted as Roman Pearce in 2003’s 2 Fast 2 Furious, it wasn’t until Fast Five where he became he became...
- Advertisement -