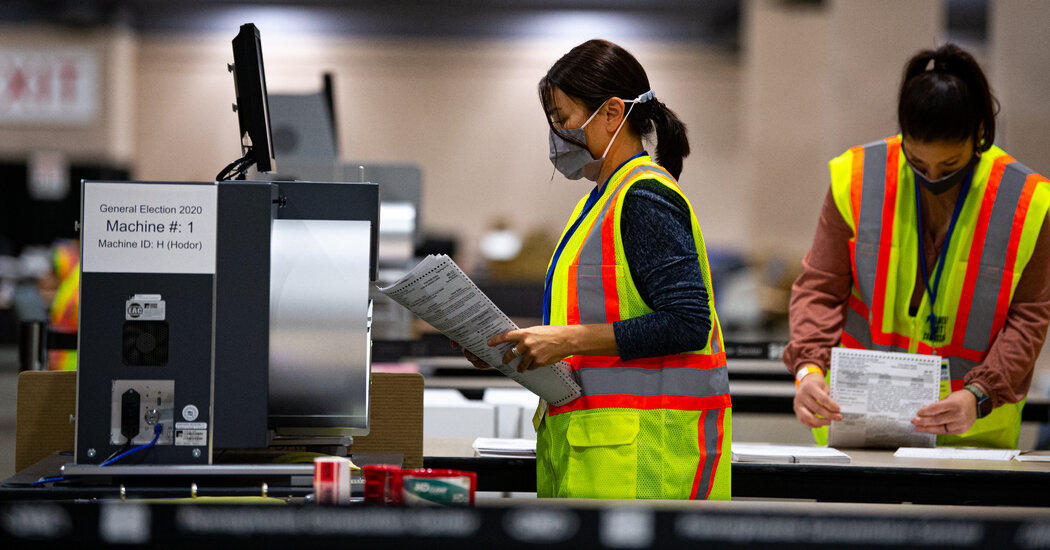 Want to get The Morning by email? Here’s the sign-up.

Good morning. There is no presidential winner yet. Biden appears to be in a better position than Trump, and Republicans seem in better shape to hold Senate control.

Joe Biden is now the favorite to win the presidency, and Republicans are favored to keep Senate control — but both results are far from certain. And Democrats failed to win the resounding victory that pre-election polls had suggested they could.

Here’s where we stand after a topsy-turvy election night, in which the situation shifted multiple times:

Further down, you’ll find information on some of this year’s other races — including more detail on the Senate, as well as the latest on state ballot initiatives. First, though, I want to give you a selection of commentary on the national scene.

“The vote-counting happening now is…. exactly what we knew and reported would happen. This is legitimate vote-counting, of ballots that were returned before or on Election Day.” — Scott Detrow, NPR

“This is an extremely flammable situation and the president just threw a match into it,” Chris Wallace said on Fox News, after Trump’s remarks. “He hasn’t won these states.”

“Donald Trump called it a ‘fraud’ to continue to count votes. This does not sound like a democracy.” — Olivia Nuzzi, New York Magazine

“What Trump did tonight is shocking, even though he’s been telegraphing this for some time. He’s primed his supporters to believe any result that doesn’t involve him winning is fraud.” — Rosie Gray, BuzzFeed News

“Trump may indeed win. But he certainly hasn’t yet. And, he doesn’t get to say that your vote shouldn’t be counted.” — S.E. Cupp, CNN

“Every single serious analysis I read of this election said that it would be long and drawn out, and that Trump would try to steal the election by trying to discount late-arriving Biden votes. And now that it’s happening…everyone seems shocked.” — Anne Applebaum, The Atlantic

“Incredible how competitive Trump is with 230K+ covid deaths and kids being locked in cages and everything else. Even if Biden wins he will have to govern in a Trump country. This is who America is.” — Gabriel Sherman, Vanity Fair

“In any normal presidential democracy, this would not be a close election right now. It is only close because of our strange Electoral College.” — Lee Drutman, New America think tank

“A key question moving forward is whether public opinion polling is irreparably broken or if polling is just broken in elections with Trump on the ballot.” — Nathan Gonzales of Inside Elections.

“Biden POTUS with GOP Senate is a recipe for a horrifically nasty politics next year.” — Matt Glassman, Georgetown political scientist

“Democrats had hoped for a massive, unequivocal repudiation of Donald Trump for his mishandling of the pandemic, his raging White House incompetence, and his disdain for the rule of law. Instead, there was the sobering message that Trump’s support in key states like Florida was, in truth, greater than the polls had predicted.” — Walter Shapiro of The New Republic.

Subscribers make our reporting possible, so we can help you make sense of the moment. If you’re not a subscriber, please consider becoming one today.

Cornbread tamale pie, a recipe from The Joy of Cooking, is a crowd-pleasing classic. It elevates a beef chili by baking it with a simple cornbread batter on top.

The pangram from yesterday’s Spelling Bee was chantey. Today’s puzzle is above — or you can play online if you have a Games subscription.