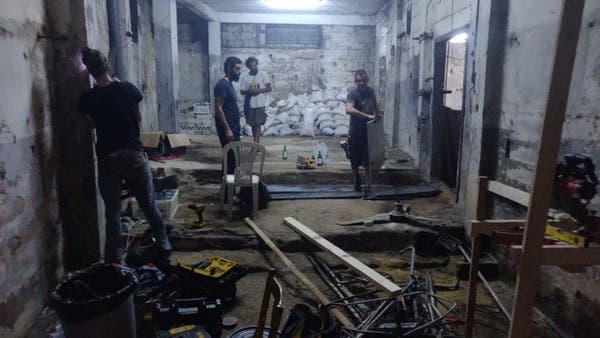 When Dutch construction worker Jasper Nom and Portuguese pharmacist Joao Pequeno heard about the devastation caused by the August 4 Beirut Port blast, they hopped on the first plane to Lebanon with nothing but the clothes on their backs and suitcases full of tools, looking to do whatever they could for the city’s beleaguered citizens.

Three months on, the repair work being done in the aftermath of the blast, which claimed over 200 lives and left an estimated 300,000 people without homes, is still mounting up.

Nom and Pequeno work their normal jobs for between 6 to 8 months of the year, and then spend the rest of the year offering their services in disaster zones like Serbia and Croatia. They had originally intended to head to Bosnia but changed plans when they heard about the Beirut blast.

Together, they have been working around the clock – without any payment – for months, battling feverishly against an endless stream of projects and repair works that continue to pour in from desperate families across the city.

“We could see loads of teams cleaning up, but it was still an absolute mess,” Nom told Al Arabiya English. “People were living in half collapsed buildings. I only do paid work to support myself. As soon as I’ve made enough money, this is what I do.”

Their efforts have inspired other specialists – both locally and from abroad – to join them in their cause. Initially, they were working in the streets, directly in front of the damaged buildings. Now, this aptly named and ever-expanding ‘Dream Team’ has a brand new workshop in Beirut’s popular Mar Mikhael district, thanks to an ongoing collaboration with local NGO Kilna Ya3ni Kilna, as well as Lebanese architect Ola Khazaal.

“A common friend introduced me to them, as they could help me in rebuilding the houses,” said Khazaal. “I loved how they were so dedicated to helping others. Then we tried to make this group between us, so we can just help more.”

Originally founded in December 2019, Kilna Ya3ni Kilna (“All Of Us Means All Of Us” in English) started out as a small-scale initiative to distribute donations amid both public demonstrations against Lebanon’s entrenched political elite and a deepening financial crisis that continues to grip the country. The organization’s name is a play on the anti-government chant heard in the protests: “All of them means all of them.”

“Before the blast, we were helping people with food, medicine and rent money,” said Rayan Khatoun, a survivor of the Beirut blast and one of Kilna Ya3ni Kilna’s key organizers. “After the blast, it became more urgent, for shelter, so [Khazaal’s] receiving funds, and then we’re putting in our funds. Three months later and people are still without windows and doors. The guys are basically offering free labor. People are getting all of this for free.”

Acquiring the necessary raw materials was initially challenging, with items like glass and wood being particularly hard to source, especially with only limited funds available. Without a constant supply of cash, the Dream Team has to make the best of what is available to them.

“As an architect, I can get stuff for a reduced price and – as they know that we are doing this for the re-building of Beirut – they also take this into consideration,” explained Khazaal.

In the absence of much state-organized help, the massive outpouring of support from the local community has been essential, with local suppliers offering deep discounts to the continuing reconstruction effort. Even the workshop space itself has been offered with a significantly reduced rent fee.

“The people are incredible,” remarked Pequeno. “Apart from being really nice, the response that we saw from the locals and whoever’s around has been amazing. I never saw anything like it in terms of disaster response. People really know what to do here, which is amazing to see.”

The workshop is not simply a matter of convenience, however. With the onset of the winter in Lebanon, torrential rainstorms have already begun to sweep the country, bringing the risk of further destruction to already damaged houses.

“Before, we’d offer a person a basic door straight out of our factory and ask them to paint it themselves, because it’s quite time consuming and it requires a lot of space which we didn’t have,” explained Nom. “That was fine then. Now, we need this space with a roof over our heads. We need to have it completely painted before we install it.”

Despite the urgency of the situation and many offers of paid work, the Dream Team is committed to offering their specialist skills free of charge to the people of Beirut for as long as they are needed. While Nom and Pequeno do plan to move on eventually, they hope others will continue to provide structural support over a longer period of time.

“We don’t want to take jobs from people,” said Nom. “The moment we feel like we’re actually taking away work from paid workers here, that’s when we’ll stop, but as long as there’s too much work to be done and a lot of people will not get help because they’re on a waiting list, we’ll stay.”

In Lebanon, Beirut’s port needs rebuilding, but no one has yet stepped up

Art emerges from rubble of destroyed Beirut gallery, proceeds to help with rebuilding

Is China Laying Claim to Kimchi, Too? Some South Koreans Think So

Georgina Mace, Who Shaped List of Endangered Species, Dies at 67