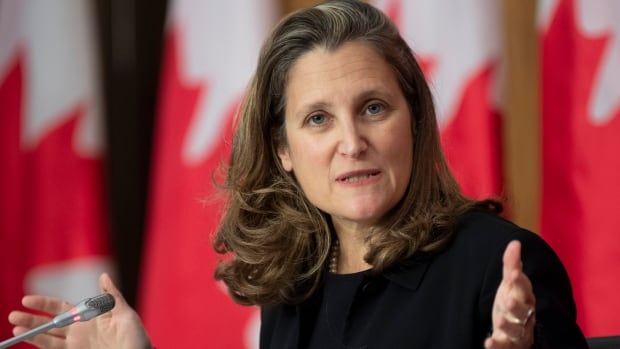 During a four-hour question-and-answer session in the House of Commons, Freeland refused to provide any new numbers about the size of this year’s deficit, the overall federal debt or the potential ballooning cost of servicing that debt should record-low interest rates begin to rise.

She told MPs that those projections would come in a fiscal update later this fall, not before. She declined to set a date for that update.

“I don’t think the minister has given a single number with regards to any of these questions,” Conservative finance critic Pierre Poilievre complained at one point during a series of sharp exchanges with Freeland.

Freeland countered with two numbers, arguing that debt servicing charges as a share of GDP “are the lowest in 100 years” and that 76 per cent of Canadians who lost their jobs due to the pandemic are back at work.

But Poilievre accused Freeland of a coverup and of being afraid of disclosing the real costs of the billions in relief programs the government has created.

“I’m not afraid of much,” Freeland countered, challenging Poilievre to come clean with Canadians.

“The Conservatives need to decide, are they the party of austerity or do they believe in supporting Canadians through this crisis.”

The grilling took place as part of an agreement among all parties to fast-track the government’s latest emergency aid bill, which would provide rent relief for businesses and extend the wage subsidy program.

Bill C-9 would extend the federal wage subsidy until next summer, cancelling a previously planned decline in its value, as well as expand a popular business loan program.

The legislation would also redo a rent relief program that was widely criticized because its original design needed buy-in from landlords, many of whom did not participate.

And it would also provide top-up help for businesses whose revenues crash because of local lockdowns to slow the spread of COVID-19.

Freeland referenced the bill in a tweet earlier Thursday as she voiced support for an extension of restrictions in Canada’s largest city for another week.

“I know these restrictions are difficult for many Toronto businesses. That is why we (are) working very hard to extend the wage subsidy, create a new rent subsidy, and provide extra lockdown support.”

The Liberals reached an agreement with opposition parties on Wednesday to fast-track the legislation through the House of Commons and have it passed by Friday.

It will still need Senate approval before being enacted. The Senate agreed Thursday to have its finance committee launch a pre-study of the bill, which is expected to occur next week while the rest of Parliament is on a break.

Earlier Thursday, Bloc Quebecois Leader Yves-Francois Blanchet told reporters he wants to make sure the bill includes a provision to prohibit political parties from benefiting from the wage subsidy.

The Liberals, Conservatives, New Democrats and Greens all used the program earlier this year when their donations dried up from the pandemic.

“They should never, even if they would have been in difficulty, have touched that money,” Blanchet said.

The bill comes on top of billions already rolled out to sustain individuals and businesses across the country during the pandemic.

The government’s last look at the books in July estimated a deficit of $343.2 billion this fiscal year, but that was before added promises laid out in September’s throne speech.