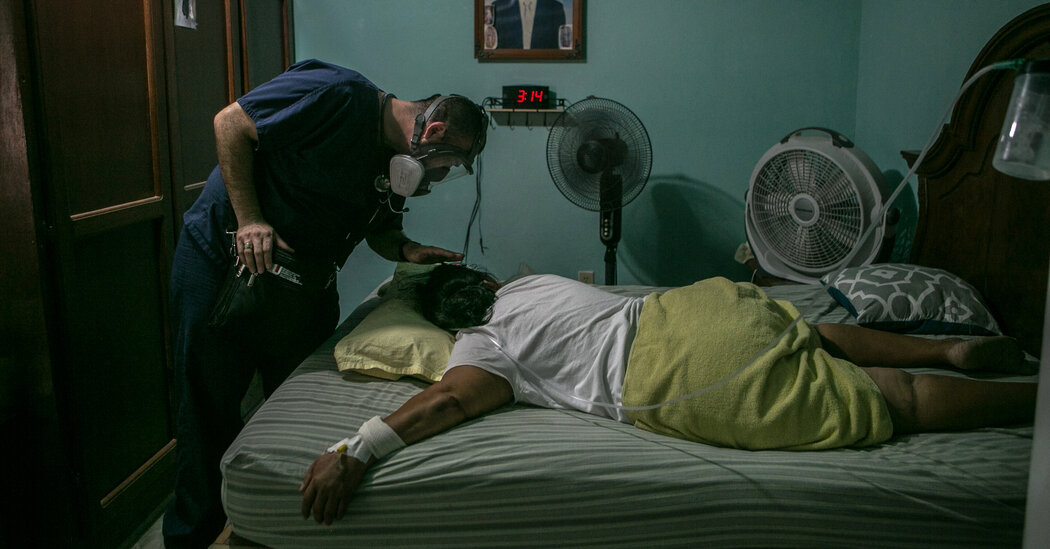 REYNOSA, Mexico — Gustavo Gutiérrez pulled up to the residential corner and scanned the street. Before long, a man ran toward him, desperation etched on his face.

“Inside, doctor, she’s inside,” the man said, pointing to his home. His wife was dying of Covid.

In the darkened living room, the woman, Dolores Bustamante Robles, slumped on a sofa, slowly sipping oxygen from a rusted tank. The doctor stooped to check her vitals. The family braced for bad news.

“Good,” he said, tucking the stethoscope in his bag. “When you’re all better, I’m coming over and you’re going to cook me some.”

If laughter heals, Dr. Gutiérrez, an affable physician and one-man roving medical clinic, has developed a rare practice in the turbulent times of Covid-19. He relies on humor, positivity and intimacy, qualities most patients have been robbed of by the pandemic.

He is also addressing one of the most vexing issues facing Mexican officials battling the virus: a refusal by patients to seek treatment from hospitals. A deep-seated fear of hospitals has meant thousands die at home without receiving proper care.

Indeed, having seen the crowded, ghastly conditions and rampant infections in Reynosa’s medical centers, where he himself caught the virus, Dr. Gutiérrez could hardly blame them.

And so he devised an elegant solution: He would, against all advice, deliver treatment directly to those in need. By his count, he’s seen well over 200 patients in their homes since June, traveling between Reynosa, the state’s largest city with 600,000 people, and Matamoros, another large border town.

“People are suffering in ways you can’t imagine, and if we bring that fear with us, it only makes them more afraid,” Dr. Gutiérrez, 39, said. “The worst part about this damn virus is that we’ve lost our humanity.”

On this day, Dr. Gutiérrez would visit six more houses before heading to his overnight shift as an emergency room doctor at a regional hospital, a routine of 20-hour days he has maintained since he started the home visits.

He began early in the summer, when a neighbor in the construction business said his workers began falling ill, and asked him to check on them. The hospitals were full, he said.

Dr. Gutiérrez, who was home recovering from his own infection, agreed to see them in his garden. Over the course of a week or so, he saw dozens of people, until a different neighbor complained that he was going to infect everyone.

But by then, the word had spread. He was receiving calls from numbers he didn’t recognize and decided that, armed with antibodies after recovering from his own infection, he would start seeing patients in their homes.

Nowadays, his phone rings no fewer than 50 times a day. On busy days, he sees up to 25 people, charging about $90 for those who can afford it, nothing to those who can’t.

“It makes it a little hard to enjoy my own life,” he admits. “But if it was my family looking for help, I’d want the doctor to answer.”

His wife, Jocelyn Guerrero, jokes that either she or their two little girls will need to get sick to get his attention.

“He’s always been like this,” she smiled, running her hand over his short-cropped hair at breakfast one morning. “Only now, instead of being around two hours a day, we barely see him.”

In the half-hour that Dr. Gutiérrez spent with Mrs. Bustamante and her family, he missed eight phone calls. And the phone rang again as he settled into his SUV: It was a man calling on behalf of his mother-in-law, an hour away in Matamoros.

The doctor offered some basic advice — she should lie on her stomach and drink water — and promised to visit later in the week.

The calls continued. A young man on the verge of tears, afraid his mother would die. And then the phone rang again, for the third time in four minutes.

“I can’t even answer all the calls,” he sighed, ignoring the next incoming one. “It’s really just chance and luck.”

The next stop was the home of a 25-year-old maintenance worker, Fabián de León Sánchez, who had worked with Dr. Gutiérrez at the hospital.

He had contracted the virus on the job, most likely while transporting a ventilator, and yet refused to be admitted despite blood oxygenation levels of 73 percent, a dangerously low level.

“It was horrible at the hospital,” Mr. de León said, sitting up in bed. “I preferred to recover at home.”

He was better now, not 100 percent, but good enough to laugh and joke with the doctor.

Dr. Gutiérrez, who has become a minor social media celebrity, asked the young man to join him for a photo to post on Facebook. Mr. de León, eager to show his victory over the virus, asked his wife to bring him his boxing gloves for the picture.

Outside, the sun cast an infernal heat on the city, with the temperature brushing up to 100 degrees. Dr. Gutiérrez’s phone began buzzing again. Another WhatsApp video call.

On the screen, an older man lay on a bed covered in a green sheet. His face looked nearly frozen. The man’s son turned the camera around and asked the doctor for help.

Dr. Gutiérrez began with his standard questions about symptoms and pre-existing conditions.

“Does he have a fan or air-conditioner? And is he drinking water?” the doctor asked.

No, said his son.

“He’s in that small house, burning up,” the doctor explained. “A lot of people are simply dehydrated.”

Another call. The family of Mrs. Bustamante, with questions about the prescriptions he sent.

The daughter of a 74-year-old woman, who had become ill 10 days earlier, called next. He promised to visit.

Dr. Gutiérrez pulled into a private hospital down the street from his home, where he fielded another three calls.

He had taken to using the facility for patients he did not think would survive at home. Inside, he said a quiet hello to the family of one of his patients, huddled in the waiting area, too numb to weep.

Their father had died that morning, the second member of the family lost to Covid-19. A week earlier, the man’s 29-year-old daughter had died of complications from the virus.

His daughters and wife were waiting for the final paperwork.

Dr. Gutiérrez called the family’s youngest daughter, 27, into a private room. She carried a large file with her. He pulled out a stack of forms and asked for her father’s work credentials.

When he asked for a social security ID, she grew flustered, rifling through the accordion tabs.

“Honestly, we didn’t prepare for this,” she said, her face flushed. She continued to pick through the file, then stopped and looked at the doctor.

“With my sister, we knew what was happening more or less,” she added, composed now. “We never expected this.”

Outside, the doctor started up his SUV and cranked the air conditioning. He checked his phone. Six more missed calls.

He didn’t want to talk much about the dead patient, a man named Mario, who left behind a wife and two surviving daughters.

Not that it affected him, he said. He was long past that. He wouldn’t get caught up in the grief, because doing so would make his job impossible.

And right then, with his phone ringing on his dashboard, he had more patients to see.