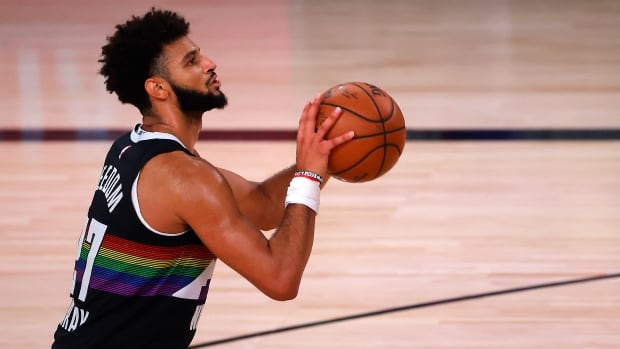 This is an excerpt from The Buzzer, which is CBC Sports’ daily email newsletter. Stay up to speed on what’s happening in sports by subscribing here.

Here’s what you need to know right now from the world of sports:

Nothing is official yet, but the NBA and the players’ union are reportedly close to agreeing on a 72-game season that starts Dec. 22 and sees the Finals end before the Summer Olympics. ESPN reported that the union reps from each team were going to vote on the proposal today, and they were expected to approve it. Both sides expected the Dec. 22 start date to be settled by the end of the week, according to the report.

Other issues need to be worked out as well, including two related to the massive revenue losses caused by the pandemic. Those are the salary cap for next season and what percentage of players’ salaries will be held in escrow — and presumably kept by the owners because it doesn’t look like fans will be allowed back in arenas anytime soon (though owners are now reportedly hoping for limited seating in luxury boxes and courtside — the priciest areas). ESPN reported that, rather than withhold 35-40 per cent of players’ salaries for the upcoming season (roughly equal to the slice of revenue the league claims is lost by not having fans in attendance), owners will take back 18 per cent in each of the next two years to smooth out the financial hit a little for the players.

Assuming everything goes ahead as planned, the calendar will look like this: Draft on Nov. 18 (that’s already scheduled), free agency shortly after that, and training camps opening Dec. 1. The regular season should end in mid-May, allowing for a full playoff tournament to conclude by mid-July.

That would allow NBA players to compete in the Tokyo Olympics, which open July 23. But it still leaves the Canadian men’s national team in a tricky spot. Their last-chance qualifier is scheduled for June 29-July 4 in Victoria, and Canada has to win the six-team tournament to reach the Olympics for the first time since 2000.

The Canadian team could be stronger than ever with NBA standouts Jamal Murray and Shai Gilgeous-Alexander potentially forming an excellent backcourt, and a pretty deep pool of NBA talent to support them. But if, say, Murray’s Denver Nuggets are still alive in the playoffs at the end of June (they made the final four this year) or guys are just tired from a compressed season that’s starting very close to the end of the last one, Canada might go into that qualifier without some of its best players. Read more about how the teams hopes are tied to the NBA schedule in this story by CBC Sports’ Myles Dichter.

Vancouver still hasn’t decided if it will look into bidding on the 2030 Winter Olympics. City council voted last night to postpone the decision on whether to explore the possibility of a bid, likely until early in the new year. If they eventually decide to move ahead, the city would feel out the federal and provincial governments about funding for the bid (they cost a fair bit to prepare) and also seek input from the Canadian Olympic and Paralympic Committees and local First Nations. Only then would a decision be made on whether to launch a bid. The person in government pushing hardest for one right now is city councillor Melissa De Genova, who thinks the Olympics could help Vancouver’s recovery from the pandemic. 2030 will mark 20 years since the city hosted the Winter Olympics, but some of the venues used for those Games are either obsolete or have been converted for other uses. Read more about Vancouver possibly exploring the possibility of another Olympic bid here.

Some Canadian skiers are being sent home from Europe because of coronavirus concerns. CTV reported that multiple members of Canada’s ski cross team contracted the virus in Switzerland, where they were training for the upcoming season, and that one of the athletes is “seriously ill.” Alpine Canada, the organization that oversees the ski cross team, among others, refused to comment on the report. But a spokesperson told CBC Sports that a decision was made to “relocate some teams to Canadian venues where athletes can take part in on-snow training in anticipation of World Cup races and the world championships.” Read more about the situation with Alpine Canada’s skiers here.

Milos Raonic reached the quarter-finals of the Paris Masters. This is a good tournament. It’s worth 1,000 rankings points to the winner (putting it in the tier below only the Grand Slams and the year-end ATP Finals) and the total purse is around $4.5 million US. World No. 1 Novak Djokovic decided to skip it, but No. 2 Rafael Nadal is playing (and picked up his 1,000th career win yesterday). Raonic, who’s ranked 17th in the world and seeded 10th in Paris, advanced to the final eight today by defeating unseeded Marcos Giron for his third straight-sets win in as many matches. His next opponent is 34th-ranked Frenchman Ugo Humbert, who beat Marin Cilic today.

Canada’s Kelsey Wog won two more races in the International Swimming League. Wog, who competes for the Toronto Titans team, took today’s women’s 200-metre breaststroke and 200m individual medley and also helped Toronto’s women’s 4×100 medley relay team finish second in its race. The other Canadian winners today were Kylie Masse (women’s 50 backstroke) and Brent Hayden, who anchored Toronto’s men’s 4×100 freestyle relay team to victory. This was day 1 of the two-day match, which concludes Friday from 4-6 a.m. ET. Another match, not involving the Titans, is also taking place and it wraps up Friday from 10 a.m.-noon ET. You can stream every race in both matches live here.

Tonight and tomorrow on CBC Sports

Women’s golf: The second round of the Korean LPGA Tour’s Hana Financial Group Championship is streaming live here from midnight-3 a.m. ET, with a replay here from noon-3 p.m. ET.

Grand Prix of Figure Skating — Cup of China: The second Grand Prix of the season (Skate America was two weeks ago, then Skate Canada was cancelled) begins Friday at 2:30 a.m. ET with the opening round of the ice dance event. That’s followed immediately by the women’s, pairs and men’s short programs. The skates run until about 7 a.m. ET and you can stream them all live here.

You’re up to speed. Get The Buzzer in your inbox every weekday by subscribing below.