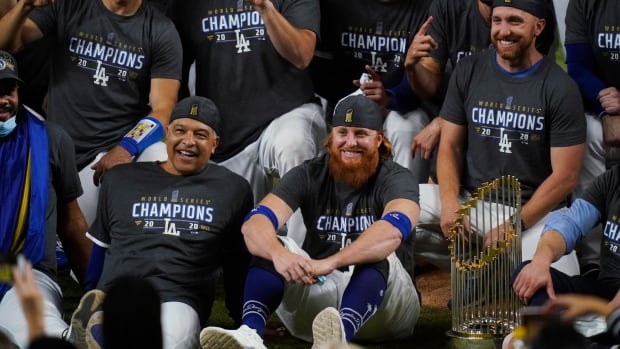 Justin Turner will not be disciplined by Major League Baseball for coming onto the field last week to celebrate the World Series title with his Los Angeles Dodgers teammates after testing positive for COVID-19.

The third baseman was removed after seven innings of Game 6 on Oct. 27 after MLB informed the Dodgers of the test result. He returned to the field after Los Angeles won 3-1, took off his mask and posed for a photograph with teammates.

“Second, Mr. Turner believes that he received permission from at least one Dodgers employee to return to the field to participate in a photograph. Although Mr. Turner’s belief may have been the product of a miscommunication, at least two Dodgers employees said nothing to Mr. Turner as he made his way to the field, which they admitted may have created the impression that his conduct was acceptable.

Justin Turner was removed from the Los Angeles Dodgers’ 3-1 victory over the Tampa Bay Rays after registering Major League Baseball’s first positive test in 59 days, but he returned to join the celebrations about an hour after the game. 2:16

“Third, during the somewhat chaotic situation on the field, Mr. Turner was incorrectly told by an unidentified person that other players had tested positive, creating the impression in Mr. Turner’s mind that he was being singled out for isolation. Finally, Major League Baseball could have handled the situation more effectively. For example, in retrospect, a security person should have been assigned to monitor Mr. Turner when he was asked to isolate, and Mr. Turner should have been transported from the stadium to the hotel more promptly.”

Manfred said he spoke with Turner and “I am closing this matter by applauding Justin for accepting responsibility, apologizing and making a commitment to set a positive example going forward.”

Turner said he watched the final two innings with his wife Kourtney in a doctor’s office in the clubhouse and he assumed there was no objection by Dodgers officials to his returning to the field. He also said that when he returned to the field, he thought few people would be there and his plan was to take a quick photo with his wife.

“However, what was intended to be a photo capturing the two of us turned into several greetings and photos where I briefly and unwisely removed my mask,” Turner said in a statement. “I sincerely apologize to everyone on the field for failing to appreciate the risks of returning to the field. I have spoken with almost every teammate, coach, and staff member, and my intentions were never to make anyone uncomfortable or put anyone at further risk.”

MLB is making its COVID-19 testing laboratory available during the off-season for underserved areas in communities where major league teams are based.