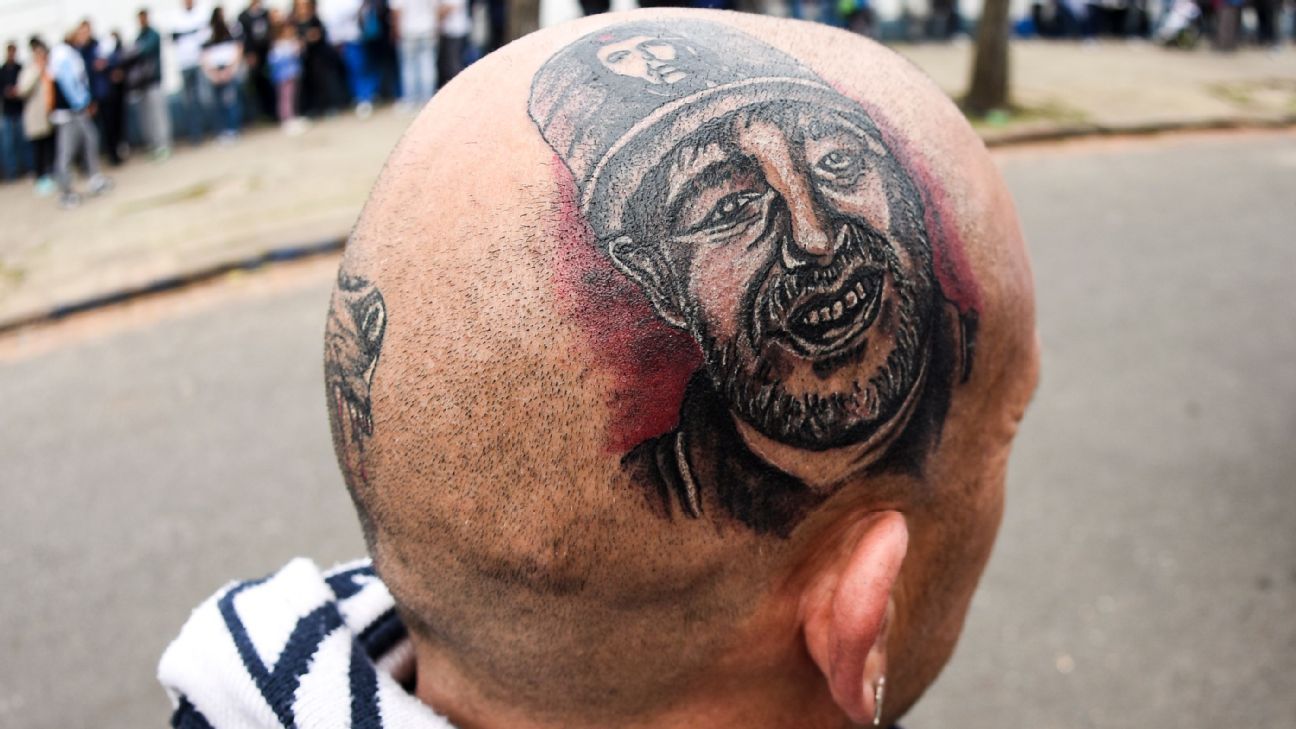 As most fans of most clubs will know only too well, you can be singing the name of a player on the terraces one week only to see them move on the next.

JUMP TO: Villarreal in need of a Yellow Submarine

Valencia supporter Joshua Munoz found this out the hard way recently when his favourite player, Geoffrey Kondogbia, was suddenly sold to La Liga rivals Atletico Madrid for just €10 million outside of the transfer window.

As if losing a first-team staple for a relative pittance wasn’t bad enough, Los Che fan Munoz had paid good money to have an enormous tattoo of Kondogbia on his upper thigh.

Kondogbia first arrived at the Mestalla in the summer of 2017, with Munoz deciding to get his tattoo tribute in the run up to Valencia’s big meeting with Barcelona in the Copa del Rey final in 2019. He even got the opportunity to show the indelible portrait to the man himself beforehand.

However, despite Kondogbia moving on to pastures new, Munoz has proclaimed that the ink tribute is going nowhere.

“It [the tattoo] is going to remain as it is,” he told reporters defiantly. “At the time, I thought it was a good idea. I don’t regret it.”

Valencia went on to beat Barca 2-1 in the final with Kondogbia coming off the bench on the hour mark to help shore things up against Lionel Messi and Co. At the very least, the tattoo will always remind Munoz of better times for Los Che.

And let’s face it, he’s not exactly the only fan to have invested in questionable football-themed body art over the years.

Back in the summer of 2017, one grumpy Arsenal fan lost a social media wager when the club signed Alexandre Lacazette from Lyon…

Well done to @sxmleach who got this tattoo after Arsenal signed Lacazette! pic.twitter.com/Si4QUHEalO

This Seattle Sounders fan celebrated Clint Dempsey’s arrival at the club in 2013 by getting an image of, we think, Sinead O’Connor tattooed behind his ear.

Sometimes I’ll just remember that there’s someone out there with this Clint Dempsey tattoo and I’ll just sit quietly, nodding in awe and reverence. pic.twitter.com/WpU0X3LCxN

There’s a couple of entries for Beckham, firstly for himself after he misspelled his wife’s name back in 2000. Yep, we can imagine how this went down in the Beckham household after he opted for Hindi script but got “Vihctoria” tattooed onto his arm. Rather than, of course, “Victoria”.

Beckham’s fans have been known to make the odd gaffe too, with one managing to miss the “h” from his surname.

This Brazilian fan obviously asked for a Neymar tattoo. Who or what the artist responsible ended up doodling on her skin is very much open to debate.

If Jamie Carragher, Dirk Kuyt and Clint Eastwood had a baby…

Kuyt himself is no stranger to grinning and bearing it after being confronted with dodgy fan art, with the Feyenoord legend even adding his signature to one proud supporter’s tattoo…

One Man United fan went and got a loving homage to Gary Neville that unfortunately looks more like the “Chestburster” scene from Aliens.

Manchester United fan gets tattoo of Gary Neville on his leg http://t.co/jQ1lVYlbQ3 pic.twitter.com/LWHvVOrrVd

A Liverpool fan forgets to run a quick spell-check before getting his ill-advised tattoo tribute to defender Kolo Toure.

This classic of the genre proves that failure to double-check tattoo spelling is not just confined to the red half of the Merseyside divide.

There’s obviously something in the water at Everton when it comes to their fans spending hard earned money on truly ridiculous tattoos — and that something is likely to be Echo Falls rose wine. The fan in question had presented James with a bottle of rose — through the player’s car window — after the 5-2 win over West Brom at Goodison Park in September. The Colombian accepted his reward, and the supporter chose to make sure it was something he would never be able to forget.

The Everton fan that gave James Rodriguez a bottle of wine has got a tattoo to remember the occasion 🍷 pic.twitter.com/ayq8dmUH6n

We suspect several devoted Man City fans chose to immortalise Aguero’s famous title-winning strike against QPR in tattoo form, but only one decided to have the entire transcription of the Sky commentary by Martin Tyler forever needled onto his arm.

This intrepid City fan decided to have the name of three club legends stencilled upon his chest: Robinho, Shaun Goater, and Kaka. One problem, Kaka never actually signed for City and was the subject of a failed transfer bid in 2009.

can we stop for a moment to remember the city fan and his kaka tattoo pic.twitter.com/FDfzLSVgFE

All you need to know about this one is that Sheffield Wednesday were founded in 1867.

Remember when a Sheffield Wednesday fan got a tattoo of their crest but with the wrong date? http://t.co/agXfDDGykT pic.twitter.com/R0IgjbcLaO

A tattoo of Totti in his pomp would be a perfectly understandable addition to any Roma fan’s personal portfolio, but a tattoo of the Giallorossi hero taking a selfie of himself? Bonkers.

A Roma fan has already got a Francesco Totti selfie tattoo http://t.co/qSBjMCLqE8 pic.twitter.com/1HODL3U6LZ

A true masterpiece, in which a Newcastle fan attempts a grandiose tribute to Alan Shearer and ends up with a baked potato with Steve McClaren’s face drawn on it instead.

This Newcastle fan was spotted with this Alan Shearer tattoo at Old Trafford on Saturday. A fitting tribute #NUFC pic.twitter.com/R9l3d9VyQf

This enormous Flamengo tattoo required 32 sessions over the course 90 hours to complete, let alone probably costing the same as a modest family car.

We stumbled upon this @Flamengo fan in Brazil who has covered his body in tattoos of the team kit. So in the spirit of Social Sunday’s, we thought we’d start the hunt for a Collingwood equivalent! #socialPIES pic.twitter.com/WorxkIFf4R

Felipe Alvarez loves Atlético Nacional so much he got a small tattoo to show it #AtleticoNacional #Verdolaga #soccer pic.twitter.com/vOWS6qz07F

Gimnasia fans were understandably excited to have a living legend take over as head coach of their team in 2019.

One supporter even went to the trouble of having an image of the Argentine icon tattooed right across his bald head — only to see Maradona quit less than three months later having taken charge of just eight games.

Villarreal in need of a Yellow Submarine

Villarreal were left to thank their hardworking ground staff after they worked miracles to ensure the club’s Europa League tie against Maccabi Tel Aviv could go ahead.

In the hours before kick off, a huge storm enveloped the Estadio de la Ceramica, with torrential rain and strong winds hitting the city.

Indeed, the game had to be delayed by an hour as the pitch quickly became an ocean. Guess they don’t have the nickname the Yellow Submarine for no reason.

It’s estimated that 60 litres per square metre fell on the grass, with the playing surface becoming so sodden and wind-lashed that it began to take on a hypnotic squalling effect at one point.

#UEL | There’s no doubt that these heroes were the real stars of the match today. 🦸‍♂️ pic.twitter.com/kLutwsfpqZ

Villarreal went on to win 4-0 thanks to goals from Carlos Bacca (2), Alex Baena, and Fernando Nino, though the club were in no doubt as to who the actual heroes were on the night.

Harry Potter’s Daniel Radcliffe Revealed A NSFW Moment That Happened On Set, And It...

Movie admin - December 5, 2020 0
When Daniel Radcliffe signed on to play the eponymous hero in the Harry Potter film series, he probably had at least some idea...

Movie admin - December 5, 2020 0
There Must Be Multiple Sasquatch Monsters Okay, this is the only semi-spoiler I think I’m putting here, but there need to be multiple Sasquatch...
- Advertisement -