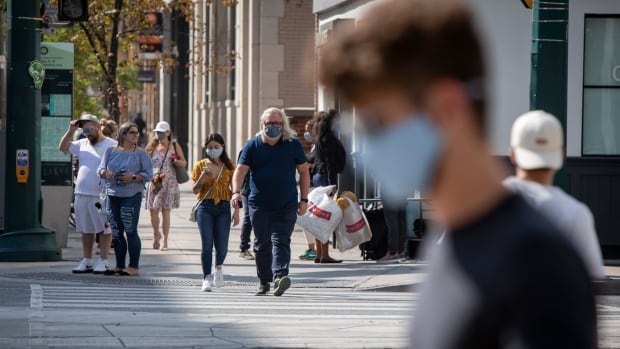 Saturday’s update surpasses the previous high of 1,050, which was reported on Tuesday.

The colour-coded system — which classifies each public health unit as a red, orange, yellow or green zone based on caseload and transmission levels — came into force at midnight, as previous measures imposed on a handful of hot spots were set to expire.

Only Peel Region, which has seen rising cases in recent weeks, was deemed a red zone, while other hot spots such as York Region and Ottawa were labelled as orange. Toronto is scheduled to join the other regions next week.

The orange level limits bars and restaurants to 50 people indoors, with no more than four seated together.

Health officials in Peel had asked that the region remain under a modified Stage 2 — the restriction classification system previously used by the government — which involves more stringent rules such as a ban on indoor dining in restaurants and bars.

Also as of 12:01 a.m. on Saturday, the following public health unit regions were moved to the yellow zone of the province’s pandemic plan:

You can read more about what each colour-coded zone means here.

Meanwhile, according to documents obtained by CBC News, 100 COVID-19 patients are in intensive care units as of Friday night — the highest since June.

There are also 384 COVID-19 patients currently in Ontario hospitals, up four from Friday. Those requiring ventilators also increased by three and now sits at 52.

The new cases bring Ontario’s official total of cases since the outbreak began in late January to 82,825. Of those, 70,938 are considered resolved. Some 852 cases were marked resolved on Saturday.

Saturday’s update has also pushed the seven-day average of new cases — a measure that provides a clearer picture of longer-term trends — past 1,000 for the first time to 1,013.

Ontario is reporting 11 more deaths, with its official death toll standing at 3,220.

The province said it has conducted 39,165 tests since the last daily report, well below capacity. Another 44,572 are in the queue waiting to be completed.

(Note: All of the figures used in this story are found in the Ontario health ministry’s daily update, which includes data from up until 4 p.m. the previous day. The number of cases for any particular region on a given day may differ from what is reported by the local public health unit, which often avoid lag times found in the provincial system.)