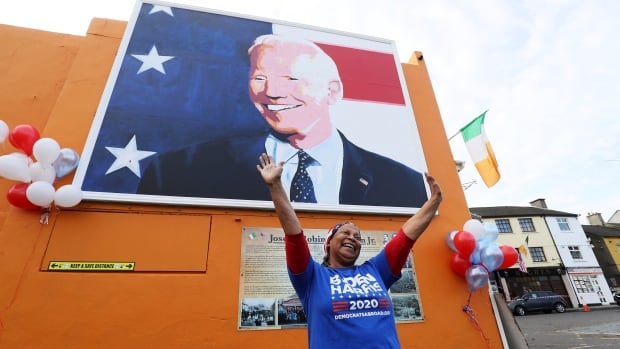 Relief was a common theme expressed in many parts of the world to the news that Trump’s re-election bid failed.

“Welcome back America !” tweeted Anne Hidalgo, the mayor of Paris.

Congratulations poured in for Biden from world capitals, included in nations governed by leaders who got along with Trump, essentially ignoring his claims that the divisive election race wasn’t over.

“The Americans have chosen their President. Congratulations @JoeBiden and @KamalaHarris! We have a lot to do to overcome today’s challenges. Let’s work together!” tweeted French President Emmanuel Macron.

“We will further build on this foundation as we continue to keep our people safe and healthy from the impacts of the global COVID-19 pandemic, and work to advance peace and inclusion, economic prosperity, and climate action around the world.”

Like Trudeau, Johnson picked up the theme of climate change in congratulating Biden, saying he looked forward to “working closely together on our shared priorities, from climate change to trade and security.”

Washington formally quit the Paris accord on limiting greenhouse gas emissions on Wednesday, fulfilling a pledge by Trump to withdraw the world’s second-largest emitter from the pact. Biden has promised to rejoin the agreement if elected.

Johnson also congratulated Harris on her “historic achievement.” Harris is the first Black woman set to become vice-president, an achievement that comes as the U.S. faces a reckoning on racial justice.

The California senator, who is also the first person of South Asian descent elected to the vice presidency, will become the highest-ranking woman ever to serve in government, four years after Trump defeated Hillary Clinton.

Cascading around the globe on social media and live news broadcasts, word of the victory in Pennsylvania that pushed Barack Obama’s former vice-president past the threshold of 270 electoral college votes needed to take over the Oval Office sparked cheers in a Rome coffee bar and celebrations elsewhere.

A city official in Berlin said, “After the birth of my son, the election of Joe Biden is by far the best news of this year.”

“Everything won’t get better overnight, but Trump is finally gone!” tweeted the official, Sawsan Chebli.

In India, Prime Minister Narendra Modi, who’d been known for public displays of bonhomie with Trump, posted a photo of himself with Biden and sent congratulations for “your spectacular victory!”

“I look forward to working closely together once again to take India-U.S. relations to greater heights,” Modi said.

Congratulations <a href=”https://twitter.com/JoeBiden?ref_src=twsrc%5Etfw”>@JoeBiden</a> on your spectacular victory! As the VP, your contribution to strengthening Indo-US relations was critical and invaluable. I look forward to working closely together once again to take India-US relations to greater heights. <a href=”https://t.co/yAOCEcs9bN”>pic.twitter.com/yAOCEcs9bN</a>

He also congratulated Vice-President-elect Harris in a separate tweet for her “pathbreaking” success and said her win is a “matter of immense pride” for all Indian-Americans.

“It makes us proud that the first woman to serve as vice-president of the U.S.A. traces her roots to India,” said the leader of India’s opposition Congress party, Rahul Gandhi.

Diverse American women describe what it means to them to have Kamala Harris elected as the first female vice president of the United States. 2:37

Harris’s late mother was from India. Kamala is Sanskrit for “lotus flower,” and Harris gave nods to her Indian heritage throughout the campaign.

“She will be an incredible example and important role model for young girls throughout the world, showing them girls and boys enjoy the same rights and opportunities,” Belgian prime minister Alexander De Croo said.

In Ireland, where Biden traces his family roots, Prime Minister Micheal Martin said in a statement that the country “takes pride in Joe Biden’s election, just as we are proud of all the generations of Irish women and Irish men and their ancestors whose toil and genius have enriched the diversity that powers America.”

Western allies quickly looked forward to a fresh start with a new administration in Washington.

“We’re looking forward to working with the next U.S. government,” German Foreign Minister Heiko Maas tweeted. “We want to work in our co-operation for a new trans-Atlantic beginning, a New Deal.”

President-elect Joe Biden started out in Scranton, Pa., and has experienced tragedies and triumphs in his long journey to the White House. 3:03

“Ready to keep on working to make our relations ever stronger in defence of peace and freedom,” he said.