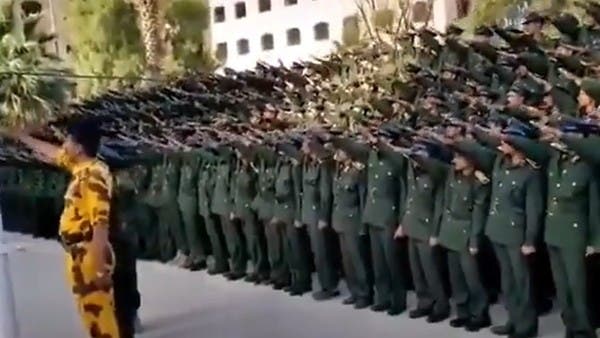 The Iran-backed Houthi militia “unabashedly” showcased their “appalling anti-American and anti-Semitic rhetoric” during a police academy graduation ceremony in Yemen’s Sanaa, the Yemeni embassy in Washington said on Thursday.

A video shared by the embassy on Twitter shows uniformed men holding the Nazi salute and chanting, “Death to America. Death to Israel. Curse the Jews.”

“Rather than looking like militias in traditional attire, Iran-backed Houthis seek to appear as [a] uniformed & professionalized force. Either way, it is to brutally repress the population in Yemen,” the embassy said.

Rather than looking like militias in traditional attire, #Iran-backed #Houthis seek to appear as an uniformed & professionalized force. Either way, it is to brutally repress the population in #Yemen. 2/4

Yemen’s embassy called on the international community to condemn the Houthis’ “brazen” and “hateful” behavior, adding that the group will turn the country into a police state if they are not stopped.

The intl community must categorically condemn the #Houthis for this brazen hateful conduct and apply the highest pressures on Houthis to reach a final political solution to conflict in #Yemen that they precipitated. 4/4#UNSC

In recent weeks, the militia has been ramping up its efforts to strike Saudi Arabia and several areas in Yemen outside its control.

Iran has been backing the Houthis in Yemen’s civil war against the internationally-recognized government.

Currently, the Houthis control the Yemeni capital Sanaa, while the official government is based in the city of Aden.

US warns of drone, missile attacks on Saudi Arabia’s Riyadh