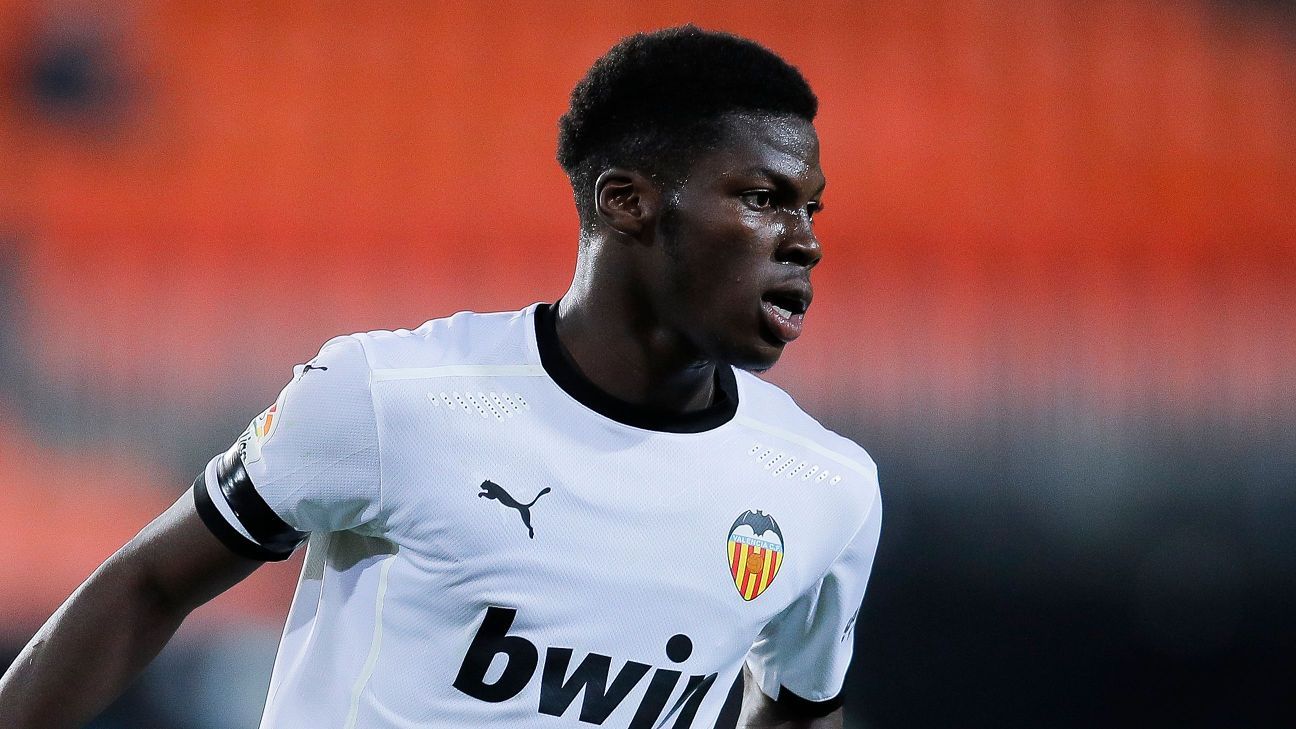 Yunus Musah had taken a circuitous route to be where he is, but he’s put his foot down and sped off fast and straight, accelerating directly into history. A Ghanaian England youth international born in New York, raised in Castelfranco Veneto near Venice, Italy, and in Barking, east London, he raced across the field of the Mestalla in Spain, hitting 20.8 mph (33.5 kph) as he ran. There was just one thing on his mind.

“I can see a marker behind me and I see [Denis] Cheryshev but I keep going and keep going,” he said. “The only thing in my head is the goal.”

Picking up the ball inside his own half, a huge gap appeared before him and he headed straight into it, not stopping until, 50 metres further on, with everyone trailing miles behind, his shot took the ball past David Soria and him into the record books. His shout broke the silence and his teammates eventually caught up with him, embracing him. When they dispersed, he knelt down, head on the turf, and prayed.

In 79 years, no one younger had scored for Valencia, and it had only happened once in their whole history. No overseas player has ever done so. He was 17 years, 338 days old, and already a regular at one of Europe’s biggest clubs.

“Incredible,” Musah called it, and it was. “It’s incredible to be such a young age and score at a club with such history.”

Life comes at you fast — or at least it does when you’re going at that speed. A few days later, the call came to join the United States men’s national team, who had been following him closely for a while. Nico Estevez, assistant to U.S. coach Gregg Berhalter, had worked at Valencia and helped build communication between the club and with Musah’s family.

“One thing I’m careful about is that I always want to know the players’ connection to the United States,” Berhalter said on Tuesday. Musah’s connection is a story of chance: eligible by birth, his family were visiting New York in November 2002.

Nor is his decision definitive: Musah has played with, and captained, England at youth level; the games during this get-together, based in Swansea, are not official. Berhalter was quick to note that “he’s obviously chosen us now, but there’s a long term still to be decided.” The coach also offered a warning: “What we have to remember, and I think all of us are getting ahead of ourselves just little bit, [is that] he’s 17 years old.”

Born in the U.S., his family lived in Italy where the president of the local club told Super Deporte, “You could see a mile off that he had the qualities to succeed” and a “phenomenon,” a kid whose “only obsession was the ball.” At the age of nine, he moved to London as his parents were looking for work, and stood out there too, joining Arsenal‘s academy, always playing in teams beyond his years.

Valencia’s coaching staff admit that, truth be told, they didn’t know Musah when they arrived this summer, a year after he had. By contrast, former manager Marcelino did. Sacked by the club at the beginning of last season, forced out in September 2019 despite having taken the team to the Champions League and won the Copa del Rey, Marcelino had told people that this kid was going to be a bit special. Although Musah was just 16 last year, Marcelino included him in the Champions League squad and in first-team training.

Pablo Longoria, the club’s sporting director at the time, had known Musah for a long time and took advantage of legislation preventing English clubs from tying youth players to professional contracts in order to bring him to Spain. Valencia did not even need to negotiate for a footballer that Longoria thought would be important, blessed with exceptional qualities: an all-around midfielder who was outstanding technically and physically. Personally, too. Asked what Musah is like, one insider says simply, “la hostia.” Literally, it’s the communion wafer, the body of Christ. The absolute business, in other words. Super-competitive, disciplined, bright, happy, and integrated immediately.

A box-to-box central midfielder who sees his greatest quality as his passing and, asked who he played like, came up with Paul Pogba, Valencia saw Musah primarily as a No. 8 with llegada, arrival: the timing, understanding and physique to dash into the area from deep. Able to cover a lot of ground, here was a player so good he could play across the midfield, including the right flank, going inside and outside. And if there were mistakes still, that was fine: you had to let him make those. If he didn’t, you’d be talking about a 23- or 24-year-old, not a kid yet to come of age.

For Musah, a return to southern Europe was attractive and only four clubs across the continent’s top five leagues have developed more first-division professional players than Valencia, according to a CIES study.

“If you look at past trends, a lot of players reach the first team. That’s the kind of possibilities players see in our academy,” says academy director Sean Bai, and it is self perpetuating. “The attractive thing is that there is a strong chance of making the first team and they see that. And now everyone is trying to be the next Yunus.”

As Musah himself put it this week, “There are players in the first team that are young. That gives you the motivation to keep going.” More than that, when he was approached by Valencia a plan was put before him, a sense of direction, a pathway toward opportunities. Adaptation, meanwhile, was made easier by his roots in Italy — at the most basic level, learning Spanish is relatively simple for an Italian speaker — and his brother came with him, while within the academy the club talk about mentoring, about finding “buddies” for new arrivals.

It wouldn’t take long before he was in the first team, they thought. But Marcelino’s departure slowed things, with his replacement Albert Celades calling upon Musah less; the plan to push him through was seemingly reversed, or at least put on hold. He played with the B team, Mestalla, although the pandemic limited that to just 17 games last season. Some even talk of a year effectively lost. If so, he had made up for that time and fast, talent and circumstance accelerating everything this term.

“He’s an exceptional kid,” says Luis Martinez, the technical director of the academy. “He has a super-positive attitude, plays with happiness. He has that power and acceleration. We’re seeing him do things we saw last year with Mestalla. It was just a matter of time before we saw him in the first team so we’re very happy.”

It wasn’t just a matter of time; think economics and policy as well, factors beyond a footballer’s control. Sometimes you get lucky.

That plan for Musah’s development might have been affected by Marcelino’s departure — Longoria was also forced out, as was CEO Mateu Alemany — but almost by accident, another appeared. Necessity is the mother of all invention, and it turned out Valencia needed Musah. Opportunity doesn’t always knock at the appointed time.

“When it does, young players have to grab it,” Bai says. “And Yunus did a great job. Things arise that are out of our control and then he has the talent and the tenacity to grab that chance.”

This summer Valencia sold six first-team players who could be considered starters, and they didn’t sign anyone to replace them. Ferran Torres‘s departure, which the club insist they didn’t plan, in particular left a space on the right side of midfield.

It was more than that, even. Dani Parejo and Francis Coquelin (and now Geoffrey Kondogbia) left, which meant having to seek solutions in the middle. That in turn meant Carlos Soler and Daniel Wass, who had played on the right, being looked at as solutions centrally. (In Wass’s case, the departure of Cristiano Piccini also made him an option at right-back).

Dan Thomas is joined by Craig Burley, Shaka Hislop and others to bring you the latest highlights and debate the biggest storylines. Stream on ESPN+ (U.S. only).

Rodrigo‘s departure to Leeds United meant Kang-in Lee being likely to play a more advanced, more central role. And so, while Musah considers himself a central midfielder and is likely to end up there –that is where Berhalter intends to try him with the USMNT — here was a place to play.

This wasn’t manager Javi Gracia’s plan, and he wasn’t pretending to be happy with what was happening. Indeed, as the team was dismantled and assets stripped, he offered to resign. But that process did reveal other assets, beginning a look at the resources he had within reach, a search for solutions in a manager who has a habit of bringing through young players, trusting in them and making common cause with them. Which is absolutely not the same as gifting games to anyone. And if Gracia didn’t know much about Musah before he arrived at Mestalla, one day there, he was. And the coach was hugely impressed by what he saw.

Given the chance to play in a preseason friendly against Castellon, Musah didn’t waste it. “He’s the youngest but he has stupendous qualities,” ran one match report, “speed, strength and vision; he is daring and takes people on.” The verdict from within the technical staff was clear: so strong, so quick, his decision making was exceptional for a 17-year-old too. “He has things that are just not normal for a kid that age. He’s ready.”

Oh, he’s ready. “It’s just a question of playing and playing,” Musah said. He has played seven of Valencia’s eight games so far this season, starting with the opening day against Huesca. By the end of the night, Musah was exhausted but delighted, no avoiding the feeling that something special had begun. All that was lacking was the goal, one shot flying off the bar. “I just wanted to enjoy it,” he said afterward. “Next time, I have to score.”

Against Getafe, he did — faster, earlier than anyone else in almost 80 years. From New York to Italy, England and Spain, and from his own half to history in a flash.