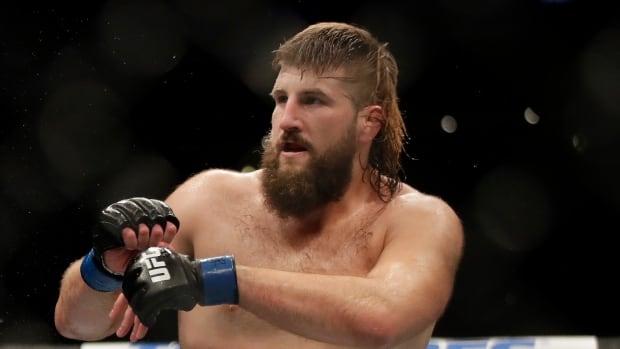 A native of Bonnyville who now calls Edmonton home, Boser turned heads with his last two wins and came into Saturday’s fight as the favourite.

The two fighters gave each other plenty of respect with not much action in the first two rounds. Boser was busier and landed a lot of low leg kicks but Arlovski had more power in his hands.

Teixeira absorbed some heavy punishment early in the first round but survived and took Santos down, controlling the rest of the round. Santos was taken down again in the second, with the 41-year-old Teixeira dominating while nullifying his opponent’s striking power. The round ended with Santos close to being choked out.

Santos floored Teixeira early in the third, hurting him with nasty strikes, only to be taken down again by the resilient Teixeira and quickly submitted of 1:49 the round.

It’s marked the first fight for Santos since recovering from knee surgery to repair ligament damage in a gutsy loss to then-champion Jon (Bones) Jones at UFC 239 in July 2019.

It was a cagey first round with more feints than punches as the fighters felt each other out. Boser managed to land several leg kicks with Arlovski connecting on a heavy punch to the head as the round finished.

It was more of the same in the second although Arlovski landed a kick to the head. Boser, who landed several less powerful kicks, was clearly aware of Arlovski’s power and was partially caught by a spinning backfist as the round ended.

They got busier in the third with Boser continuing to find a home for his kicks. While Arlovski looked to use his power, backing Boser up when he connected.

Arlovski made his UFC debut at UFC 28 in November 2000 when Boser was nine. The Canadian was 13 when Arlovski, a Belarusian-born American-based fighter, had the UFC championship belt wrapped around his waist for the first time at UFC 51 in 2005.

Boser was coming off impressive knockout victories over Philipe (Monstro) Lins on June 27 and Rafael Pessoa on July 25. The two outings totalled just 10 minutes and 17 seconds compared to 30 minutes for the first two, going the distance in a loss to Cyril (Bon Gamin) Gane and win over Daniel (Daddy Long Legs) Spitz.

It was Boser’s fifth fight in 13 months — and the second on his new UFC contract. He had a brief spell at No. 15 in the heavyweight rankings before he was overtaken by others.

Arlovski had won two of his last three with decisions over Lins and Ben Rothwell sandwiched around a 29-second KO loss to Jairzinho (Bigi Boy) Rozenstruik. Nine of Arlovski’s previous 10 fights went distance. He was 4-5-0 with one no contest during that stretch.