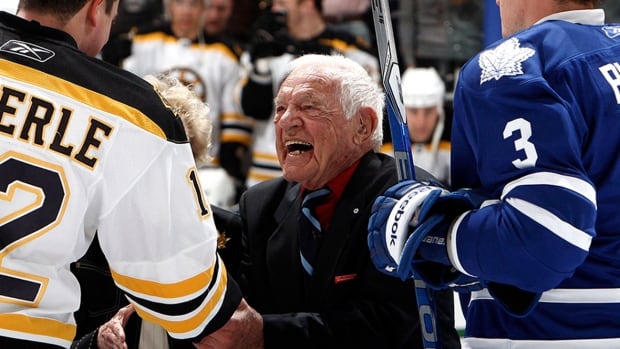 Meeker, who won four Stanley Cups with Toronto and was the oldest living Maple Leaf, was an NHL star who won rookie of the year honours in 1947 after scoring 27 goals and 45 points in 55 games.

A spokesperson for the Maple Leafs, the team that signed Meeker to a free-agent contract on April 13, 1946, confirmed his death earlier Sunday. There was no immediate word on the cause.

Meeker went on to become a broadcaster and was known for phrases such as “Jiminy Cricket,” “Golly gee willikers” and “Stop it right there!” His work with HNIC earned Meeker the Foster Hewitt Memorial Award in 1998 after a 30-year career on CBC and TSN.

Yesterday felt good. Today feels awful. Howie Meeker’s death leaves me with so much to say, and so little ability to find the right words. In this limited space, I’ll try by remembering him as the best of friends during the best times of my life.

Most famously, he passed the puck to Bill Barilko for the 1951 Cup overtime winner against Montreal.

Skated into his 80s

Among Meeker’s other career highlights was scoring five goals in a 10-4 win over Chicago on Jan. 8, 1947, one of only 44 players to tally five or more times in a game.

He continued to play pro hockey on and off for another 15 years at a variety of levels, including the American Hockey League and Newfoundland Senior League, among others.

Meeker retired from playing after the 1968-69 season and kept skating into his 80s.

Dick Irvin, a fixture on HNIC for 33 years, told the Montreal Gazette in 2014 that Meeker was the first television analyst to break down the game and criticize players.

“‘You can’t do that!'” Irvin recalled Meeker saying. “‘See what he did? That was wrong! That guy J.C. Tremblay should never have done that. Tim Horton made a mistake! Look at what he’s doing there!’

Meeker spent two years as a Progressive Conservative member of Parliament while playing for the Leafs. He won the federal byelection in the Ontario riding of Waterloo South in 1951 but didn’t seek re-election two years later.

In 2010, he was named a Member of the Order of Canada and inducted into the Ontario Sports Hall of Fame.

The equipment has changed but this advice from a 1974 episode of <a href=”https://twitter.com/cbcsports?ref_src=twsrc%5Etfw”>@cbcsports</a> “Howie Meeker’s Hockey School” holds up (as does that amazing intro). <br><br>Do you have any tips for new hockey parents? 🏒 <a href=”https://t.co/AqFXSWpmko”>pic.twitter.com/AqFXSWpmko</a>

During the ’70s, he offered up drills and tips during his Howie Meeker Hockey School sessions on CBC.

He later wrote another book called Golly Gee — It’s Me: The Howie Meeker Story. And he never ran short of opinions on how to improve the game he loved.

Howie Meeker couldn’t have been more friendly, enthusiastic or encouraging for a group of young hockey writers starting out in Calgary in the early 80s. I’ll always be grateful for the time spent talking to him, learning from him.

“Jumpin’ Jehoshaphat, this is not the way you play NHL hockey!”<br><br>As a kid, used to love Howie Meeker’s “Meekerisms” as an analyst on Hockey Night in Canada. Meeker passed away today at 97. Won Calder with <a href=”https://twitter.com/hashtag/leafs?src=hash&amp;ref_src=twsrc%5Etfw”>#leafs</a> in 1946-47. <br><br>RIP Howie.

Meeker had six children with his first wife Grace — they were married for 55 years before she died of cancer. He remarried, living with wife Leah in Parksville on Vancouver Island where they were active in fundraising for the B.C. Guide Dog Services.