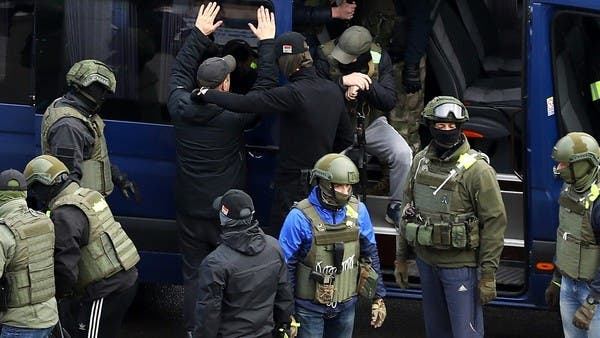 Police in Belarus detained more than 380 people on Sunday, a rights group said, as thousands took to the streets in the latest demonstrations against the re-election of strongman Alexander Lukashenko.

For three months running, tens of thousands of protesters have demonstrated in Belarus on Sundays to demand the president’s resignation following an election that critics say was rigged.

The opposition believes that Svetlana Tikhanovskaya, a political novice who ran against Lukashenko in the August 9 vote, was the true winner in the election.

On Sunday, several thousand protesters, many carrying the red-and-white opposition flag, marched through the streets of central Minsk.

Local media reported a heavy police presence, with human rights group Viasna saying that at least 380 people had been detained in the capital Minsk and other cities.

Olympic decathlete Andrei Kravchenko and the 2008 Miss Belarus pageant winner Olga Khizhinkova were among those detained, according to the Tut.by news website.

From exile in Lithuania, Tikhanovskaya said protests would continue “until victory” and that the past 90 days had shown authorities they had “lost legitimacy and power.”

Tikhanovskaya, 38, has gained the support of several Western leaders, who have refused to recognise the election results.

On Saturday, Tikhanovskaya congratulated President-elect Joe Biden and said she hopes the two can meet soon.

Democrat Biden has previously voiced support for the Belarusian opposition and promised he would expand sanctions against Lukashenko’s regime.

The European Union has slapped sanctions on Lukashenko, 66, and several of his allies over vote-rigging and police violence.

Earlier protests in Minsk were met with a brutal crackdown with police using stun grenades and rubber bullets to disperse the gatherings.