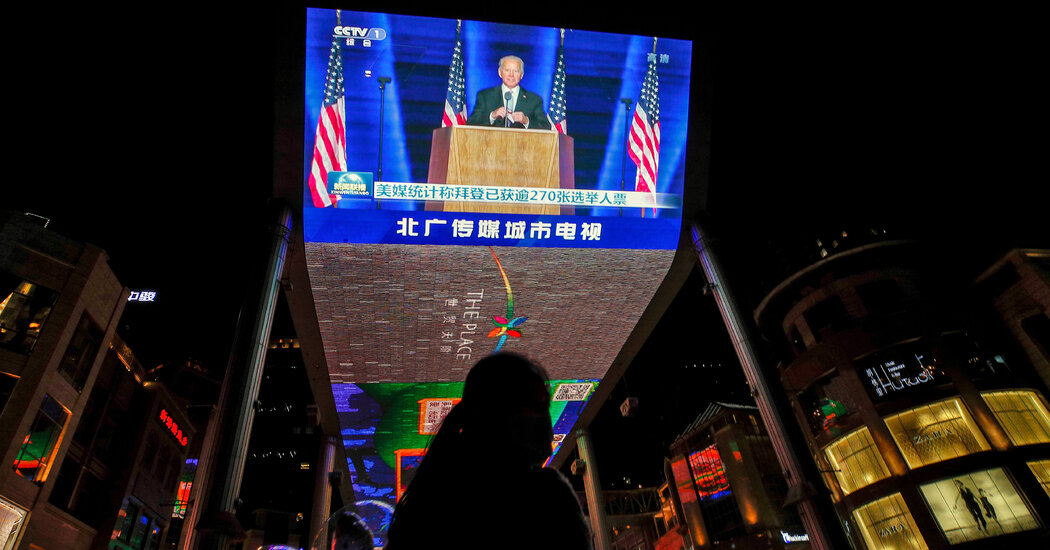 All along China’s leaders publicly professed indifference to the American presidential election, having concluded that no matter who won, the United States would remain irreconcilably opposed to the country’s rise.

The country’s top leader, Xi Jinping, has instead been pushing a strategy that would better insulate China from rising international risks, especially the antagonism of President Trump.

China now faces a new administration that has vowed to be equally tough. While many will welcome the expected change in tone from the strident, at times racist statements by Mr. Trump and other officials, few expect President-elect Joseph R. Biden Jr. to quickly reverse the confrontational policies his predecessor has put in place.

Without significant concessions by the Chinese government, which seem unlikely, the fundamental tensions between the two countries will fester. They could even become more pronounced — over trade, tech, Taiwan and other issues.

“Biden’s election will not fundamentally affect the core policies of Beijing’s leaders,” said Carl Minzner, a professor of Chinese law and politics at Fordham University in New York. Those policies, he added, “are being driven by the increasingly hard-line, one-man rule of Xi Jinping, and his desire to reassert party power throughout Chinese society.”

Since Mr. Biden was declared the winner, China’s official reaction has been relatively muted. Neither Mr. Xi nor other officials have extended public congratulations, awaiting Mr. Trump’s official concession, as a spokesman for the Ministry of Foreign Affairs suggested on Monday.

While some Chinese officials have called on the United States to lower tensions by resuming unspecified negotiations, others are bracing for even greater challenges, particularly on the issues of technology and human rights. They fear that Mr. Biden, working in concert with allies in Europe and elsewhere, could prove more effective in confronting China’s growing economic and military might.

Mr. Biden, whose views on China have hardened since he was vice president in the Obama administration, appears determined to leave in place many of Mr. Trump’s harshest measures, including tariffs and restrictions on Chinese technology. On the campaign trail, he called Mr. Xi “a thug” and vowed he would more forcefully address human rights violations, including mass detentions and forced labor in the western region of Xinjiang.

Yang Yi, a retired Chinese admiral and former director of the Strategic Study Institute at China’s National Defense University whose views reflect the mainstream thinking of the military, warned before the election that “Chinese-American relations are at a very dangerous juncture.” He pointedly cited the complacent view in Europe before World War I that continentwide conflict was unthinkable.

“It is very difficult for both countries to step back from their fixed strategic objectives,” Admiral Yang wrote in The Global Times, the nationalist state-controlled newspaper. “In the post-pandemic era, the structural tensions between China and the United States are even sharper, and it will be very hard for ‘technical measures’ to resolve or ease them.”

Even as the American campaign unfolded, Mr. Xi’s China flexed its military and political muscle across the region, calculating that the United States could or would do little in response.

It clashed with India over their disputed border in the Himalayas, cracked down on promised freedoms in Hong Kong and, most recently, targeted Australia with restrictions on exports of wine, lobster and coal. It has also responded to each punitive step by Mr. Trump with measures of its own, barring travel by administration officials and lawmakers, imposing sanctions on companies and expelling American journalists.

Much remains uncertain, including Mr. Trump’s actions toward China in the remaining weeks of his presidency. Mr. Biden has offered relatively few concrete proposals for dealing with China. In his victory speech, Mr. Biden said little about foreign policy, making clear that his first priority would be fighting the coronavirus pandemic at home. It could be months into 2021 before he turns his full attention to America’s most vexing geopolitical relationship.

Mr. Biden’s victory has raised hopes in some quarters that the two countries could resume cooperation on at least some issues, especially climate change and nuclear proliferation by North Korea and Iran. Germany’s foreign minister, Heiko Maas, appealed for exactly that in a congratulatory message to Mr. Biden on Twitter, citing the pandemic and climate change.

He also said Germany would approach the new administration with policy proposals for dealing with “actors like China,” signaling the hardening of views in Europe that have become increasingly worrisome for some in Beijing.

Cliff Kupchan, the chairman of the Eurasia Group in Washington, said the Chinese would welcome the “breathing space” to defuse tensions. That also gives them more time to build their own strength, economically and militarily.

“They are getting more and more concerned about a crisis with America,” he said in a telephone interview. “They still know they are weaker.”

Chinese officials repeatedly claimed they had no favorite in the race, calling the election an internal matter for the Americans to decide. The outcome, though, might be the best thing the Communist Party’s leadership could have wanted.

The election resulted in the defeat of a president who has pushed U.S.-China relations to their lowest point since the 1970s. It also reflected a political process that few anywhere would hold up as a model of effective, democratic leadership in a time of myriad crises.

The American failures in slowing the coronavirus outbreak — as well as the protests this year over police brutality and racism — have been a theme of Chinese propaganda ever since the country brought its own infections under control.

“The unchecked spread of the virus and continuing political tumult in the United States have reinforced Beijing’s view that the United States is in decline,” said Jessica Chen Weiss, a professor of government at Cornell University.

“So even as the Chinese leadership sees abundant domestic and international risks,” she added, “it is becoming more confident in its efforts to resist international pressure on issues that are core to its domestic legitimacy and regime security.”

Mr. Xi has used China’s success in fighting the pandemic to press a political and economic agenda to make the country less dependent on the rest of the world in crucial fields, including technology.

On the eve of the election, the Communist Party’s main journal, Qiushi, or “Seeking Truth,” published a speech Mr. Xi delivered in April outlining his strategy. He said China should enhance its dominance of industrial supply chains as a potential weapon to strike back against protectionist threats from abroad.

As the United States now moves into a likely turbulent transition, Mr. Xi is marching ahead with a new five-year plan that will guide policy starting in 2021. An outline — released, coincidentally, on Election Day in the United States — carries the stamp of Mr. Xi, who reinforced his gloomy prognosis of the global pressures at an important party gathering last month.

At the same meeting, Mr. Xi was hailed as “the core navigator and helmsman,” a title that echoes the one bestowed on Mao Zedong. He showed no sign of designating a successor that could pave the way to his retirement. With a likely third term beginning in 2022, he stands to be in power well past the next presidential election in 2024 — and possibly another after that.

“Right now, China feels like a different planet,” Rodney Jones, an economist at Wigram Capital Advisors who closely tracks China, said by email. “And that is exactly how Xi Jinping wants it.”

The Chinese government seemed eager to play down the election — perhaps to avoid emphasizing the democratic process for a population that has no role in choosing its leaders.

Coverage of the prolonged ballot counting was sparing, with election news relegated to the end of the nightly newscast. As Mr. Biden’s victory was called on Sunday morning, all of China’s state media flashed news alerts — about Mr. Xi’s instructions, issued several days ago, for a railroad connecting Sichuan Province to Tibet.

Propaganda aside, ordinary Chinese were not indifferent to the outcome. Both candidates were among the most searched topics on Chinese social media.

Students who hoped to study in the United States also had a special stake in the race: their visas, which the Trump administration has severely restricted.

“Although Biden will also be tougher toward China when he comes to power, his policy on international students may be relaxed,” said Nathan Cao, a college junior in Shandong Province who hopes to study abroad.

A popular noodle shop in Beijing that Mr. Biden visited as vice president in 2011 was more crowded than usual after his victory.

“I saw news articles saying Biden is a good father and really likes his family,” said Sunny Gao, 55, who went on Sunday and Monday, ordering the same noodles with black soybean paste that Mr. Biden tried. “I hope he will be a little good to China.”