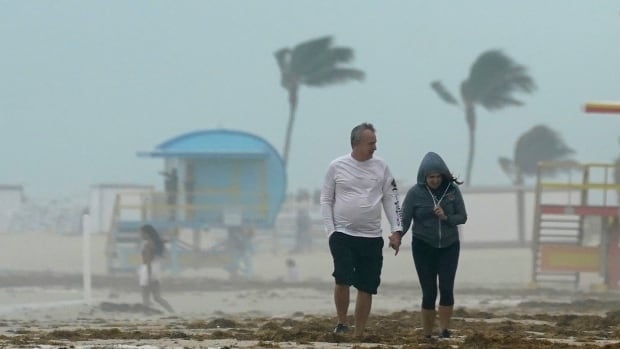 A strengthening Tropical Storm Eta made landfall on Florida’s Matecumbe Key on Sunday night, days after leaving scores of dead and over 100 missing in Mexico and Central America.

The U.S. National Hurricane Center in Miami declared hurricane and storm surge warnings for the Keys from Ocean Reef to the Dry Tortugas, including Florida Bay.

Florida officials closed beaches, ports and COVID-19 testing sites, shut down public transportation and urged residents to stay off the street. Several shelters also opened in Miami and the Florida Keys for residents in mobile homes and low-lying areas. Broward County also shut down in-person schooling Monday and Miami seemed poised to do the same.

On Sunday night, authorities in Lauderhill, Fla., responded to a report of a car that had driven into a canal. Photos taken by fire units on the scene about 48 kilometres north of Miami showed rescuers searching what appeared to be flooded waters near a parking lot.

Firefighters pulled one person from a car and took the patient to a hospital in critical condition, according to a statement from Lauderhill Fire’s public information officer. Responders were continuing to search for others.

The storm swelled rivers and flooded coastal zones in Cuba, where 25,000 had been evacuated. But there were no reports of deaths.

Eta earlier hit Cuba even as searchers in Guatemala were still digging for people believed buried by a massive, rain-fuelled landslide. Authorities on Sunday raised the known death toll there to 27 from 15 and said more than 100 were missing in Guatemala, many of them in the landslide in San Cristobal Verapaz.

Some 60,000 people had been evacuated in Guatemala.

At least 20 people also were reported dead in southern Mexico and local officials in Honduras reported 21, though the national disaster agency had confirmed only eight.