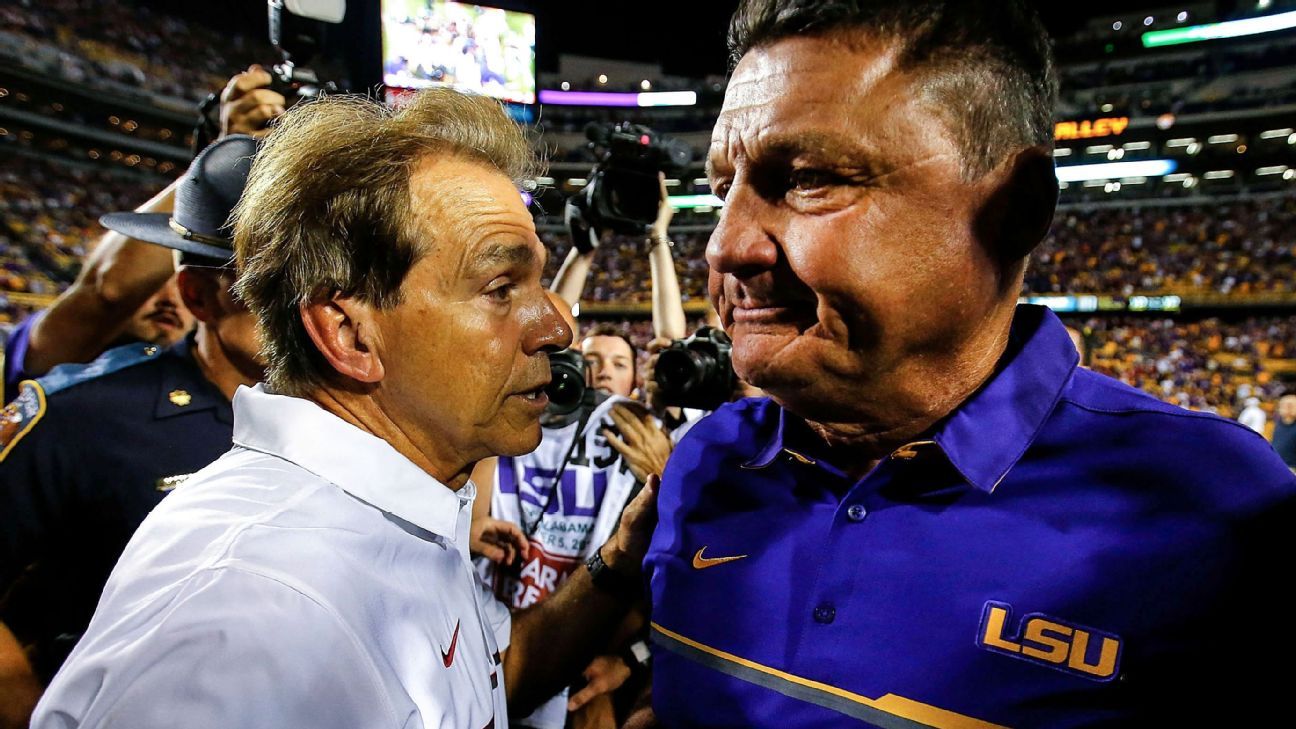 LSU‘s showdown against Alabama on Saturday is in jeopardy as the Tigers deal with multiple players in quarantine as a result of COVID-19 testing.

Multiple players, including starters, will be unavailable, coach Ed Orgeron said on Monday. Some have tested positive, while the majority are out as a result of contact tracing.

Testing has left the program thin at quarterback, and the number of quarantined players includes starters on offense, defense and special teams, a source told ESPN.

The school has been in contact with the SEC office as it continues to monitor the situation. As of Monday morning, the game against Alabama was still set to be played.

Orgeron called it a “fluid situation” heading into the next round of testing on Tuesday but would not provide an exact number of players who will be missing.

“It’s going to be challenging with the guys that are out,” Orgeron said.

If LSU is unable play Alabama, rescheduling might not be possible, as the Tigers have already gone through their open date and rescheduled their game against Florida for Dec. 12.

SEC commissioner Greg Sankey said the timeline for that decision to be made is unclear. “Some of that timing is dictated by the realities of testing and contact tracing,” he said Monday. “I don’t think any of us get to dictate timelines in this environment.”

On top of COVID-19 concerns, Orgeron said that starting quarterback Myles Brennan won’t be available to play as he continues to deal with a lower-body injury. Orgeron said the team could move a player from another position over to provide depth.

LSU, which won the national championship and went undefeated last season, has gotten off to a rocky start this season, losing its most recent game, to Auburn on Oct. 31, to drop to 2-3.

Texas A&M athletic director Ross Bjork, whose program had to shut down practice after receiving multiple positive tests, said the SEC should open the possibility of allowing make-up games on Dec. 19 for any teams not playing in the conference championship game.

He said the conference athletic directors could discuss the possibility at their weekly Tuesday meeting.

“We anticipated all this; that’s why the protocols are in place,” Bjork said. “That’s why we built in the extra week. Hopefully we can create some more flexibility by looking at the 19th.”

Information from ESPN’s Heather Dinich was used in this report.

Movie admin - December 1, 2020 0
Although Tyrese Gibson debuted as Roman Pearce in 2003’s 2 Fast 2 Furious, it wasn’t until Fast Five where he became he became...
- Advertisement -