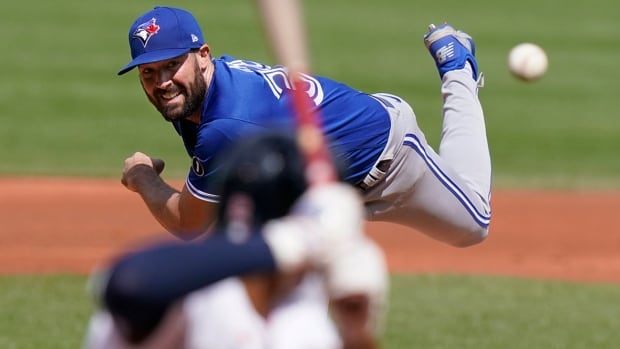 The Toronto Blue Jays were eager to shore up their rotation after losing some pitchers to free agency. Robbie Ray was keen to return on a short-term deal.

The timing worked for all involved. Ray became the first free agent to sign with a team this off-season and the Blue Jays were pleased to have more stability on the mound.

“I felt like I was in a position where I felt like a one-year deal was something that was going to be necessary for me to boost my value going into the next free agency,” Ray said Tuesday. “It just so happened that there was a fit with Toronto.

“There was mutual interest in both of us getting something together before free agency really started hitting the ground.”

The Blue Jays announced Saturday that the two sides agreed on a one-year deal worth $8 million US. The 29-year-old left-hander spent just over a month with Toronto after being acquired in a trade with Arizona last summer.

They made me feel welcome right away, really from Day 1 getting in there.— Blue Jays pitcher Robbie Ray, fresh off re-signing for 2021 season

The deal could be a good one for both sides.

With starters Taijuan Walker and Matt Shoemaker becoming free agents, the Blue Jays needed depth on the mound. Ray, meanwhile, will be motivated to get back to his 2017 all-star form after seeing his walk totals and earned-run average rise over the last couple years.

Ray said he worked well with the Jays’ coaching staff and was looking forward to competing in the American League East, a division where he feels he belongs.

“I felt like I fit in really well,” Ray said. “I liked all the guys on the team. They made me feel welcome right away, really from Day 1 getting in there.”

Ray has been fine-tuning his delivery and feels it’s close to getting back where it was a few years ago. He gave credit to pitching coach Pete Walker and team staff for their approach.

“It was just, ‘Hey, go out and pitch. Go out and put up zeroes,”‘ he said on an afternoon video call with reporters. “I think that was the biggest thing. They just allowed me to get out of my own way.

“I think that was huge for me.”

“He has shown the ability to dominate,” Atkins said during an availability during this week’s GM meetings. “There have been times when he hasn’t been dominant and last year was a tough run, especially the first half for him.

“It felt like he had gotten back closer to that 2017, 2018 performer towards the end of the season and was very effective in his time with us.”

His deal includes several bonus clauses, including $150,000 for winning the Cy Young award and $50,000 for being an all-star.

Over seven big-league seasons with the Blue Jays, Diamondbacks and Detroit Tigers, Ray has a 49-51 mark and 4.26 ERA.

Coronavirus: Pfizer, BioNTECH COVID-19 vaccine approved for use in UK

News admin - December 2, 2020 0
Britain on Wednesday became the first country in the world to approve the Pfizer-BioNTech vaccine for use and said that it will be...