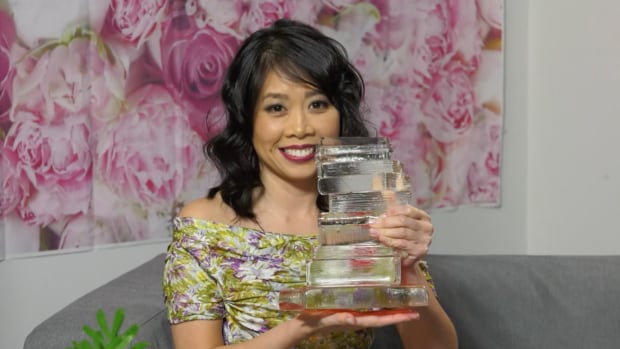 Toronto writer and poet Souvankham Thammavongsa has won the 2020 Scotiabank Giller Prize for her short-story collection How to Pronounce Knife, the writer’s first work of fiction.

Thammavongsa was revealed as the winner of the $100,000 literary prize Monday night, during a virtual awards ceremony hosted by actor Eric McCormack and featuring musical guest Diana Krall.

“Thirty six years ago I went to school and I pronounced the word knife wrong and I didn’t get a prize,” she said referencing her early education in ESL classes. “But tonight there is one.”

Jurors hailed the book as “a stunning collection of stories that portray the immigrant experience in achingly beautiful prose.”

WATCH | Thammavongsa reacts with joy as she wins the Giller Prize and it is delivered to her door:

Souvankham Thammavongsa, Giller Prize winner for her short story collection How to Pronounce Knife, talks about growing up and learning English in ESL classes — where there was no prize for mispronouncing the word ‘knife.’ 2:58

Born in Thailand, raised in Toronto

Born in the Lao refugee camp in Nong Khai, Thailand, and raised in Toronto, Thammavongsa has earned acclaim for her four poetry books and her writing has been featured in publications including Harper’s Magazine, the Paris Review and The Atlantic.

The other four finalists for this year’s prize will receive $10,000 each. They are:

The Giller Prize was founded in 1994 by businessman Jack Rabinovitch in memory of his wife, the literary journalist Doris Giller.

As established by Rabinovitch, who died in 2017 at the age of 87, the annual prize recognizes excellence in Canadian fiction, both long format and short stories.

The prize began with an annual purse of $25,000, which has increased over the years to $140,000 currently, making it Canada’s richest literary award for fiction.

Since its inception, the prize has endowed more than $750,000 to Canadian writers across the country, according to the Giller website.