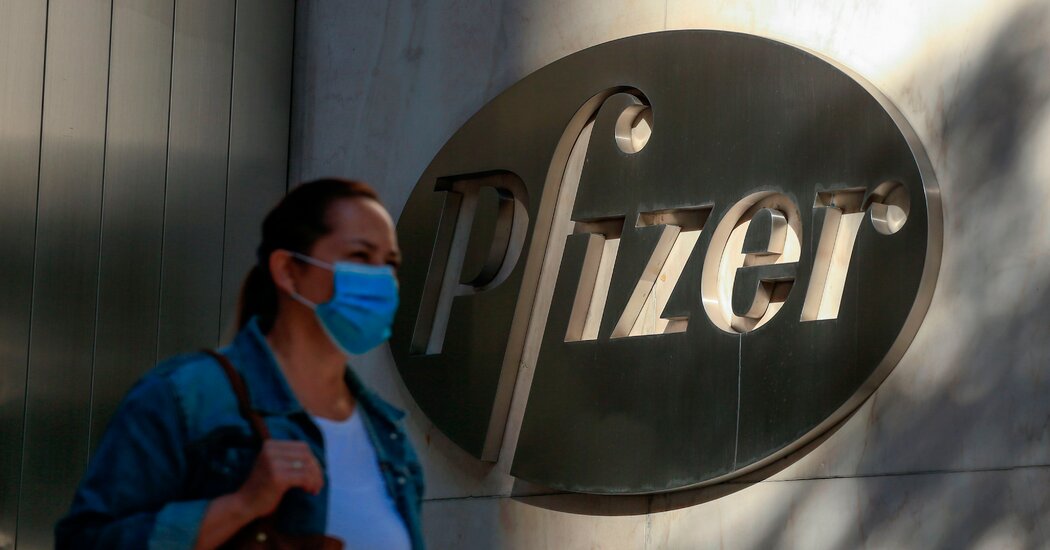 Pfizer says its vaccine is more than 90% effective

After months of surging coronavirus cases and lockdown after lockdown, the world got a glimmer of good news on Monday. Pfizer announced preliminary results from its clinical trial that indicate its vaccine, developed with the German company BioNTech, is robustly effective. If the results hold up, the level of protection would put its Covid-19 vaccine on a par with highly effective childhood vaccines for diseases like measles. Stock markets soared after the announcement.

The United Kingdom expects to have 10 million doses of the vaccine available by the end of the year, pending regulatory approval. Frontline workers and older adults would be among the first to receive it. Here’s what we know so far about the vaccine.

Vaccine tracker: Eleven vaccines are in late-stage trials, including four in the U.S. Pfizer’s progress could bode well for Moderna’s vaccine, which uses similar technology. Check our tracker here.

What Biden’s victory means for Brexit

Prime Minister Boris Johnson of the United Kingdom is in the final phases of trying to negotiate a post-Brexit trade agreement with the European Union, a complex challenge that just became more urgent with the defeat of his ally and ideological mate President Trump.

Joe Biden’s victory in the presidential election may further strain the U.K.’s negotiations with Brussels. More failure would almost certainly reverberate badly in Ireland. Mr. Biden, who speaks often and fondly of his Irish roots, has already warned Mr. Johnson not to do anything in his trade negotiations that could threaten peace in Northern Ireland.

Mr. Johnson is on unsteady footing: Mr. Biden opposed Brexit, is unlikely to prioritize a trade deal with London and has ruled out such a deal altogether if Britain does anything to water down the protections of Northern Ireland that are enshrined in the withdrawal agreement. Mr. Johnson now must balance his determination to pressure Brussels with his desire not to antagonize Mr. Biden.

Quote: “The election completely changed the game,” said Mujtaba Rahman, an analyst at the Eurasia Group, a political risk consultancy.

A possible end to the war in Nagorno-Karabakh

Prime Minister Nikol Pashinyan of Armenia yesterday signed a Russian-brokered settlement to end the conflict at the border of Armenia and Azerbaijan, surrendering disputed territory and bowing to other demands as he faced a battlefield defeat. The agreement calls for Armenian troops to withdraw from the enclave, where they will be replaced by Russian peacekeepers.

While three earlier cease-fires have collapsed, this agreement suggests a more permanent, sweeping redrawing of the security map of the southern Caucasus, a volatile region wedged between Turkey, Russia and Iran. The settlement sealed a role in the region for an increasingly assertive Turkey, a supporter of Azerbaijan in the war, which began in September.

Within hours of the announcement, protests had erupted in Yerevan, Armenia’s capital. A crowd broke into the main government building and ripped Mr. Pashinyan’s nameplate off the door of the prime minister’s office, according to footage from Russian television news.

Official remarks: “I personally made a very hard decision for me and all of us,” Mr. Pashinyan wrote in a statement announcing the agreement. “It’s not a victory, but there’s no defeat.”

How it started: For years, the countries’ leaders had agreed to postpone discussion about the disputed territory of Nagorno-Karabakh. But in the spring Mr. Pashinyan declared the area indisputably Armenian, prompting a return to all-out war.

If you have 10 minutes, this is worth it

The end of ‘America First’

But the world looks different now. Power vacuums have been created, and filled, often by China. Democracies have retreated. Although foreign allies may find Mr. Biden reassuring, they also concede that they may never fully trust that the U.S. won’t go back to building walls and making cooperation with allies an afterthought.

Here’s what else is happening

Israel: President Trump’s defeat has left Israel and its longtime prime minister, Benjamin Netanyahu, on the receiving end of an abrupt demotion on the list of U.S. foreign-policy priorities after four years of doting treatment. Mr. Biden has promised a return to a more balanced approach to the Israeli-Palestinian conflict.

Britain racism: Lord Kilclooney, a member of the House of Lords, drew heavy criticism from lawmakers for referring on Twitter to Kamala Harris, the U.S. vice president-elect, as “the Indian.” He removed the comment but defended his post.

U.S. politics: The Senate majority leader, Mitch McConnell, backed President Trump in his refusal to concede the presidential election, arguing on the Senate floor that Mr. Trump was “100 percent within his rights” to challenge the election outcome. Only four Republican senators have recognized Mr. Biden’s victory.

Myanmar’s second election: Voters turned out en masse on Sunday in elections that were expected to leave the governing party of Daw Aung San Suu Kyi as the biggest force in the country’s Parliament.

Snapshot: A small aluminum capsule found in eastern France near Ingersheim, a town in Alsace, contained a century-old message written in ink in Gothic-looking script, above. On analyzing the note, experts determined that it appeared to have been written by a Prussian infantry officer in World War I.

Lives Lived: Viola Smith, a virtuoso percussionist who was billed as the “fastest girl drummer in the world” and who performed at President Harry Truman’s inauguration and worked with Ella Fitzgerald and Chick Webb, died last month at 107.

In other ba-dum-tss news: Nandi Bushell, a British 10-year-old, found an audience with her impressive drum performances on YouTube. But it was her challenge to the Foo Fighters frontman Dave Grohl that propelled her to stardom. (Spoiler: After an epic encounter, Mr. Grohl conceded defeat.)

What we’re listening to: This episode of the “Sway” podcast, featuring the couples counselor Esther Perel. “It’s the soothing listen you didn’t know you needed,” says Melina Delkic, who writes the Asia briefing, “with comparisons of our interpersonal relationships to larger, fraught global dynamics.”

Now, a break from the news

Cook: This simple Taiwanese three-cup chicken can be a starting point. Our Food editor Sam Sifton invites you to adapt the recipe and make it your own.

Watch: “Transhood,” a documentary that chronicles the lives of families raising transgender children, and “Industry,” a new drama that follows graduates working in London’s banking world, are among the new offerings on HBO this week.

Do: Older adults who break a bone are at high risk of breaking another, often within two years. Here’s some advice to help prevent more fractures.

You might be overdue for something new. At Home has ideas on what to read, cook, watch and do while staying safe at home.

And now for the Back Story on …

What’s in store for Biden

Divisions among Democrats. Immediately after the race was called, the progressive and moderate wings of the party blamed each other for Democrats’ ceding ground in the House and failing to win clear control of the Senate.

Gridlock with Republicans. Whether Republicans keep hold of the Senate won’t be decided until two Georgia runoff elections are held in January. If they do, Mr. Biden has a solid working history with the lawmaker who will be majority leader, Mitch McConnell of Kentucky. That makes possible some bipartisan action on matters like infrastructure and economic stimulus, though after such a bitter election, neither side may be in a mood to compromise.

Balance the cabinet. Mr. Biden’s first major appointments came on Monday: He chose 13 members for his coronavirus task force. Future appointments will reveal how he plans to balance the concerns of the left, right and center.

Cool down trade tensions. The days of presidential tweets threatening trade wars may be over, but few foresee a wholesale change. Mr. Biden’s focus is at home, so pandemic relief is the priority even if allies press him to act on tariffs. Longer term, the Biden economic plan is focused on “bringing home critical supply chains so that we aren’t dependent on other countries in future crises.”

That’s it for this briefing. See you next time.

Thank you
Theodore Kim and Jahaan Singh provided the break from the news. You can reach the team at [email protected].

P.S.
• We’re listening to “The Daily.” Our latest episode is about Americans’ reactions to the election.
• Here’s our Mini Crossword, and a clue: What Pac-Man eats (four letters). You can find all our puzzles here.
• Our colleague Tara Parker-Pope shared a beautiful video of a former ballerina with Alzheimer’s, transported by a recording of “Swan Lake.” She wrote: “Music holds (and unlocks) so many of our memories.”
• Jane Coaston of Vox is the new host of our podcast “The Argument.”