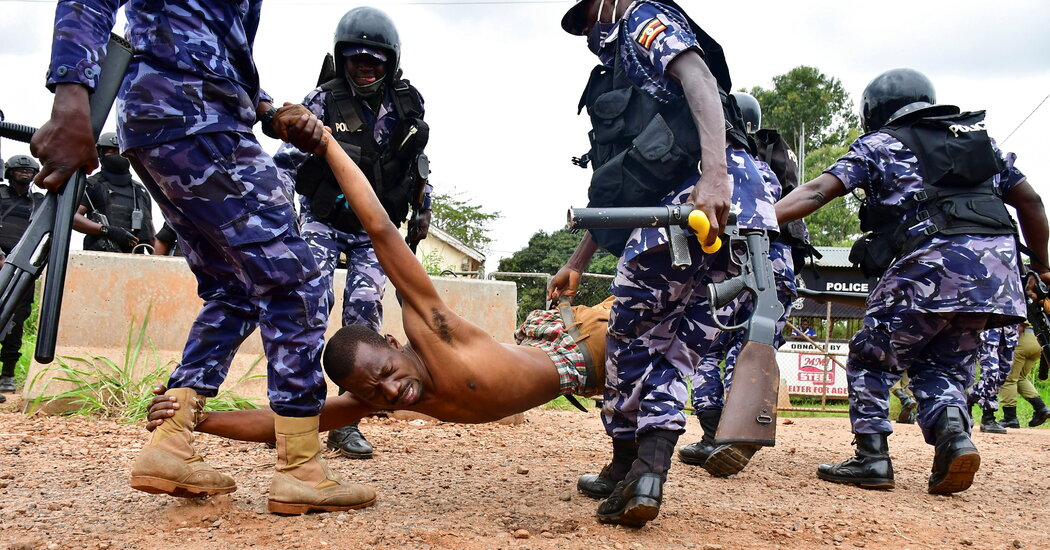 NAIROBI, Kenya — At least seven people were killed and 45 others wounded as violent demonstrations broke out across Uganda on Wednesday, the police said, after two presidential candidates were arrested while trying to campaign ahead of a highly anticipated January election.

The Ugandan police said they had arrested one of the candidates, the popular musician-turned-lawmaker Bobi Wine, in the eastern district of Luuka, on accusations that his rallies had breached coronavirus rules. “The majority of the participants had no safeguards of face masks, physical distancing and proper hygiene,” a police statement said.

Another presidential contender, Patrick Amuriat, was arrested in the northwestern town of Gulu, accused of planning to hold an unauthorized assembly. He was later released.

The unrest in Uganda echoes recent election-related violence in other African countries, including Guinea, Tanzania and Ivory Coast, where opposition figures accused entrenched leaders of having manipulated the rules and rigged the polls in order to extend their stay in power.

In Uganda, it was the second time this month that the police had detained these same two candidates. The authorities had also previously arrested Mr. Wine, whose real name is Robert Kyagulanyi, on several occasions, severely beat him in custody and even killed his driver. They had also raided his party offices and confiscated election materials.

The arrests on Wednesday fueled protests in major cities like Jinja and Masaka, and in the capital, Kampala, and its suburbs. Video and social media posts showed demonstrators burning tires, and there were reports of looting and vandalism as officers used tear gas to disperse the crowds.

The police said they had arrested several people in connection with the violence. A leading television station, NTV Uganda, said officers had confiscated equipment as one of its reporters covered the protests.

The demonstrations come barely two months before a general election in which President Yoweri Museveni will face off with 10 other candidates. Mr. Museveni, 76, is one of Africa’s longest-serving rulers and has presided over the East African nation since 1986, after the ouster of the dictator Idi Amin.

Although Mr. Museveni is credited with bringing peace, promoting economic growth and reducing rates of AIDS, his government has faced criticism over growing corruption, widespread surveillance tactics and intolerance of dissent. In 2017, he approved a measure that scrapped the presidential age limit of 75, allowing him to run for another term.

Mr. Wine, 38, is running on a platform of change and a promise to oversee a “people-centered” government that would ensure equal access to education, health care and economic development.

His rise exemplifies a standoff in recent years between aging despots and young voters in Africa, a trend also playing out in countries like Algeria, Cameroon, Sudan and Zimbabwe.

Mr. Wine has repeatedly said that he could be killed over his political efforts.

On Tuesday, in a video posted to his Facebook page, dozens of security officers could be seen surrounding his vehicle in Luuka before taking him to a detention van. In other footage posted by his political party, the National Unity Platform, Mr. Wine, with a red face mask dangling from his chin, urged officers to “be nonviolent.”

He was then transported to a police station, where the authorities said he was “interrogated on charges of negligent conduct likely to spread an infectious disease, obstruction, incitement to violence and holding unauthorized assemblies.”

The National Unity Platform tweeted out a charge sheet that said Mr. Wine was being detained for holding a rally of more than 200 people. Joel Ssenyonyi, a party spokesman, also said that Mr. Wine had been denied access to his lawyers, doctors, family and fellow party members.

“We are worried they could have tortured him and they don’t want the world to see the state in which he is,” Mr. Ssenyonyi said in an interview.