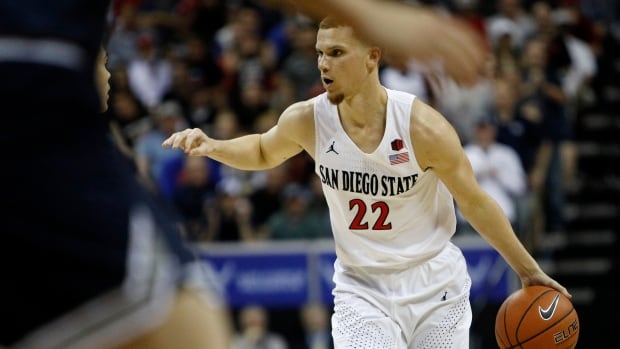 This is an excerpt from The Buzzer, which is CBC Sports’ daily email newsletter. Stay up to speed on what’s happening in sports by subscribing here.

Here’s what you need to know right now from the world of sports:

As the betting markets predicted, University of Georgia guard Anthony Edwards went first overall to Minnesota. Golden State grabbed centre James Wiseman with the second pick, and guard LaMelo Ball went third to Charlotte. No surprises there. Other stuff you should know from draft night:

For the first time in 11 years, no Canadians got picked. This was no shock either. But it’s quite the drop-off from last year, when a record six Canadians were selected — including RJ Barrett at No. 3 overall and a total of four in the first round. Some mock drafts had talented Quebec college guard Karim Mané going late in the second round, but no one bit on his potential. A silver lining: Halifax’ Nate Darling was reportedly set to sign as an undrafted free agent with Charlotte. The sweet-shooting 6-foot-5 guard averaged 21 points per game last season with the University of Delaware.

The Raptors took a pair of guards. With the 29th overall selection, Toronto grabbed Malachi Flynn. He’s a 6-foot-1 point guard who led San Diego State (Kawhi Leonard’s school) to a 30-2 record and No. 6 national ranking last season. He averaged 17.6 points and 5.1 assists and was named his conference’s player of the year and defensive player of the year. Flynn lacks size, but the Raptors have had great success with small guards Kyle Lowry and Fred VanVleet, who’s set to become a free agent on Friday and will surely get some tempting offers to leave town. With the 59th pick (second-last in the draft), Toronto took late-blooming 22-year-old guard Jalen Harris. He averaged 21.7 points, 6.5 rebounds and 3.9 assists last season for the University of Nevada. Read more about the Raptors’ picks here.

One of Milwaukee’s big deals fell through. As part of a full-court press to convince back-to-back MVP Giannis Antetokounmpo to re-sign before his contract expires this summer, the Bucks made two moves earlier this week. They reached a deal with New Orleans to acquire respected guard Jrue Holiday, and they thought they’d added more shooting by working out a sign-and-trade with Sacramento for Bogdan Bogdanovic. Unfortunately, the sign part fell through when Bogdanovic told the teams he’d rather try his hand in restricted free agency. So it looks like that deal is off, unless this is just a negotiating ploy by Bogdanovic.

Philadelphia dumped Al Horford. Just one season after signing him to a four-year, $109-million US deal, the 76ers traded the disappointing forward to Oklahoma City for Danny Green and a pair of draft picks. The move saves Philly about $25 million in salary and luxury taxes, perhaps freeing up space for new boss Daryl Morey to make a run at someone when free agency opens Friday.

An investigation led by CBC Sports’ Jamie Strashin found that, in the last decade alone, nearly $8 million was taken from youth sports organizations across the country. And that only includes cases where criminal charges were laid or a civil action was launched to recoup funds. Many thefts of this nature are never even reported to police — sometimes to avoid embarrassment for the group or because of a desire to forgive the perpetrator. So the actual total is probably much higher.

In some cases, only a few thousand dollars was stolen. In others, it was millions. But there’s a common thread: the fraud is almost always the work of one person who’s trusted to take care of the group’s finances — often with little or no oversight. A few other takeaways:

Someone robbed the Ontario Minor Hockey Association of nearly $2.4 million over just six months. That’s believed to be the biggest theft in the history of North American youth sports. According to court documents, it was carried out by the OMHA’s then director of finance, who worked for the organization for 16 years and had “sole access” to one of its bank accounts. The woman stole the money to pay off the personal credit-card bills she rang up in feeding her addictions to online gambling and shopping. She confessed, pleaded guilty and is awaiting sentencing. In another big-money case, a guy in charge of organizing competitions for a bunch of schools around London, Ont., stole almost a million dollars over the course of a decade. He used much of the money to trick out his backyard with a pool, hot tub and expensive landscaping.

In smaller communities, the thefts might be smaller, but they can hit even harder. The Corner Brook (N.L.) Minor Hockey Association serves a town whose entire population (32,000) represents about one tenth of the number of people involved in the OMHA. And the $80,000 stolen by the organization’s former treasurer is a fraction of what was taken from the Ontario association. But a theft like that can feel more devastating in a small town — places where there’s typically less wealth and more emphasis on the social fabric of the community. “The money that went missing was money that came from hard-working parents in the community,” says the new treasurer, who’s part of a group of volunteers that has worked to rebuild the Corner Brook organization’s finances.

The schemes are often stunningly simple. In 2012, the former treasurer of the Richmond Soccer Association in B.C. was sentenced to two years in prison for stealing more than $200,000 over five years. All she did was write some 200 cheques from the organization to herself and her husband. The treasurer of a different small hockey association in Newfoundland fuelled her cocaine and gambling habits by simply writing about 35 cheques to herself totalling more than $50,000 over two years. She got five months in jail.

Read the full story here and look for part two tomorrow on how tough it can be for organizations to rebuild their funds and their trust from the community after they’ve been stolen from.

Klay Thompson is out for the season. Again. This is brutal. Thompson sat out all of last year after tearing an ACL in the 2019 NBA Finals vs. Toronto, and the Warriors’ dynasty turned to dust with him gone and fellow Splash Brother Steph Curry missing the bulk of the season with a broken hand. The franchise that had reached the last five Finals and won three of them finished dead last in the league. But things were looking up with Thompson and Curry returning and No. 2 overall draft pick James Wiseman arriving to boost the frontcourt. The Warriors were even considered one of the top title contenders again. That is, until today, when the team confirmed Thompson suffered a torn Achilles (reportedly during a pickup game with other pros in Los Angeles) and is expected to miss the upcoming season. Read more about Klay’s injury here.

OK, this isn’t exactly a joyous memory for die-hard CFL fans. But it’s a colourful moment in the history of the league. On Nov. 19, 1995, the Baltimore Stallions beat Doug Flutie’s Calgary Stampeders at Taylor Field in Regina to become the first (and likely last) U.S.-based team to win the Grey Cup. Quarterback Tracy Ham won the game’s MVP award to help Baltimore bounce back from its loss to B.C. in the previous year’s championship game.

This was the third (and, it turned out, final) year of the CFL’s experiment with American expansion. Even though the Stallions drew good crowds, their fate was sealed just weeks after the Grey Cup when the NFL returned to Baltimore for the first time since the Colts moved to Indianapolis after the 1983 season. Cleveland Browns owner Art Modell finally got permission from the league to move his team there (where it became the Ravens), and so the Stallions packed up for Montreal and became the Alouettes. The CFL shuttered the other four remaining American franchises to become an all-Canadian league again. Read more about Baltimore’s Grey Cup win and watch some contemporary video clips in this story from CBC Archives.

Coming up on CBC Sports

Skeleton World Cup season opener: The bobsleigh and skeleton seasons have been trimmed to eight stops, all in Europe, beginning this week in Latvia. Canada isn’t sending any athletes to at least the first four, which takes care of the rest of the calendar year. With the exception of one Brazilian, Friday’s skeleton races are made up entirely of Europeans. Watch the two women’s runs live at 3 and 4:30 a.m. ET and the men’s at 8 and 9:45 a.m. ET here.

Grand Prix of Figure Skating: Rostelecom Cup. Once again, due to pandemic-related restrictions, no Canadian skaters are allowed to compete. But the Grand Prix’s Moscow stop features the reigning European champions in each of the four disciplines: Dmitri Aliev (men’s), Alena Kostornaia (women’s), Aleksandra Boikova and Dmitrii Kozlovskii (pairs), and Victoria Sinitsina and Nikita Katsalapov (dance), all of whom are Russian. The short programs take place Friday, and you can watch them all live here, beginning with the men’s at 5:30 a.m. ET.

You’re up to speed. Get The Buzzer in your inbox every weekday by subscribing below.